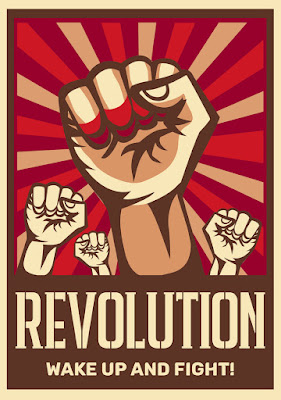 So what are you going to do now?  When the roofers and the masons and the tree trimmers and the carpenters and the plumbers and welders of the world come looking for you, what are you going to do?  This is what real anarchy looks like.  It is not a bunch of Bohemians sitting around a coffee shop talking about government tyranny.  This is a workers' revolt.  Are you going to write that strong letter to the editor and expect some other brutes, you know, the cops you are always against, to come to your aid and protect you?

I've spent half my life with the mob.  I know them well.  Maybe you could explain things to them.  Rationally, I mean.  You could give them documents and statistics.  Make them do their homework.

Oh, yea.  That's why they quit school in the first place.

I'm not against them.  I've told you all along that I love cowboys.  The world needs cowboys.  We need roofers and carpenters and tree trimmers and masons.  The problem has been liberals and their mamby-pamby ways.  Clinton calling them deplorables.  The real trouble started when we gave everyone a medal, everyone a scholarship.

Even though it wasn't a good idea.  But let's honor everybody.

On the other hand, nobody was telling me I could repair their home.

I've spent inordinate amounts of time with Neo-Nazis and bikers.  I've argued politics with them.  Maybe they felt safe since I was always the only hippie in the room, and I didn't try to make them feel stupid.  Well, not completely.  Some of them didn't like me, of course, and some were menacing.  I had two choices, usually.  Sometimes I took them both.  But I can tell you one thing.  When someone breaks your teeth, they aren't going to pity you.  Prison mentality.  "Down here, you're all on your own."  If you take the wrong side, that is.

So. . . how will you meet the violence?  I said last week, this is going to go local.  My neighborhood watch newsletter had a posting about some Neo-nazi activity today.  Fellow said he took videos and is sending it to the FBI.  I want to write, "Why don't you just go down there and give them a good talking to."  But I won't.

These are sharks with blood in the water.  There are not as many as you think there are, but there are enough.

Meth, steroids, and bombs.  What the world needs now. . .