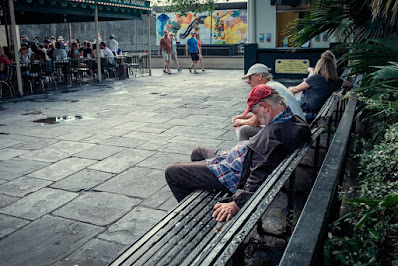 I am up late and still drugged by last night's Advil PM.  It is unlikely that I could follow the old doctor's recommendation of "take two and call me in the morning."  My fingers wouldn't work the phone.  I know that shit has to be bad for me, but sometimes the fear of not sleeping is daunting and I give in.  Like most things, however, the morning brings regrets and I think I need to start living a healthier, more virtuous life.

Then I see last night's wine bottle sitting on the counter and think, "It might be good to have some of that."

But that's not me.  That's not how I wish to live.  Opium.  Opium would be the thing.

I did some research into opium yesterday.  Well, I Googled.  That isn't really research, though I did read articles from medical journals like JAMA.  Opium is the most widely used medicine on the planet.  And I do mean medicine.  As tinctures and teas, it is used to alleviate the symptoms of many ailments.  It reduces pain, of course, which allows one to sleep, and it is in sleep that our bodies do much healing.  It was thought for a long while that opium had positive health benefits, too.  It was considered to be good for the heart and helped prevent diabetes.  Subsequent studies have not borne that out, and indeed, studies with rabbits show that there may be some deleterious effects from regular ingestion.  The major negative effect, however, seems to be constipation.  I've known opioid addicts, and indeed, they are in constant need of laxatives.  If you've ever been constipated, you might easily be dissuaded from becoming an addict.

Over the counter pain relievers, however, the stuff you can walk into the store and buy by the truckload, have many more deleterious health effects than opium, everything from liver and kidney damage to. . . and you guessed it. . . constipation.

I'd rather have opium.

I read today, however, that a very large percent of adolescents and teens in the U.S. have serious drug problems.  That is the justification for the crackdown on drugs.

Starting in the 1990s, "the message that doctors were getting was if you're a compassionate, caring physician, and your patient has pain, you'll prescribe them opioids because it's not dangerous to do so," Saxon said.

That was true for some patients, he said, but the opioids did more harm than good for others. Saxon recommended doctors look into other forms of treatment for their patients like cognitive behavioral therapy, or CBT.

Sure doc, that is what I need when I am wracked by fever and chills and joint pain.  Cognitive therapy.  Let's try that.

Opium and alcohol use is older than civilization.  It is not just the modern world that makes life painful.  Apparently it is just life its own self.

Now, I'm not one to tolerate addicts.  They are moody, unreliable, uninteresting, and often just plain deplorable.  I have not friends who are addicts.  But all my friends seem to be functionally so.  I mean, they are professionals who drink too much, smoke a little boo, take "medicines," etc.  But as a late girlfriend used to remark, "We're smarter than most people, even when we get fucked up."  And it seems to make a difference.  There is nothing like coming off a mountain after climbing its 18,000 foot peak or coming back from a ten day wilderness trek and eating and drinking and getting a little wasted.

But we are not people whose lives are focussed around the drug.

Me?  Oh, I'd handle a little opium just fine.  I don't have an addictive personality.  There are other things I like to do.  But as The Most Interesting Man in the World might say, "I don't always do opioids, but when I do. . . ."

I am around 48 hours from my second vaccine, but I'm beginning to realize that I may have a syndrome that will keep me shut away from the world.  Let's call it Covid Lockdown Syndrome.  I will coin the phrase here and then you will see it pop up everywhere.  It is a mental disorder caused by a year of obeying CDC guidelines.  I know I'll still be paranoid about being around other people, a germaphobe extraordinaire.  I never was one before.  I was the fellow who never washed his hands.  I believed you had to be exposed to germs in order to build up resistance to infection.  Now. . . OMG no!  Wash your hands, get some sanitizer, keep your distance, don't leave the house.  A year of that has infected my brain.  I will, indeed, need cognitive behavioral therapy.

The coffee pot is empty and the dopiness of last night's medicine is beginning to wane.  It is not quite freezing outside, but it is cold.  Perhaps some toaster waffles and eggs would be nice.  I just need to put the wine bottle out of sight.