Maybe It's a Fairy 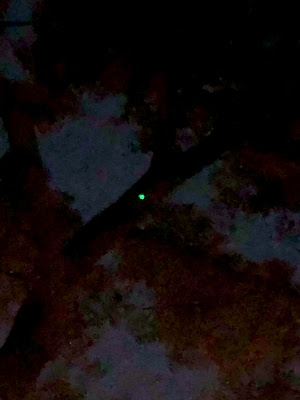 So. . . WTF is that?!?  That's the query I sent to friends last night.  I had eaten dinner and was halfway through a movie when I decided to take a drink and a cheroot out into the cold night to ponder life for a few seconds.  I had taken only two puffs off the cheroot when I looked up and to my right and saw whatever the fuck that was on the limb above me.  Trust me, in the dark night, that green light was bright. I got my phone and snapped a picture.  I sat for awhile and watched it to see if it moved.  I went inside and got a flashlight and shined it into the tree.  The flashlight illuminated the branch, but the green light overpowered it.

C.C. was the first to respond.  "Foxfire," he said.  "It could mean the tree is diseased or dying."

Great.  That is what I need, another major event.  The tree is f'ing huge.

Of course it wouldn't be a fairy.  I could use a fairy.

The movie I was watching was "Charade," with Cary Grant and Audrey Hepburn.  I'd never seen it before.  I may be gay if the way I respond to Hepburn is an indication.  Women love her in "Breakfast at Tiffany's."  Well. . . maybe that means I'm not gay because Truman Capote hated her in that role.  But what the fuck does he know?  He is responsible for people calling "Tiffany & Co." "Tiffany's."  Capote wanted Marilyn Monroe in that role and thought Hepburn was all wrong.  Au contraire, I say.  Capote was a fascinating fellow, but he didn't know everything.

The thing is, I just can't get enough of Hepburn's outfits.  She is always stunning.  Grant is Grant in the film, just less so.  Who doesn't love Grant?  But it is Hepburn who makes this Hitchcock-like film sparkle.

Surely, this was the last movie of its kind.  The world was on the cusp of change in 1963 and that old world was about to disappear.  Kennedy was gone and the British Invasion was coming.  Soon enough, it would be the Summer of Love.

Looking back, I wouldn't call it "love" exactly.

For the past week or so I've been woking my way through untouched files of photographs from the preceeding few years.  I am very pleased.  Why I didn't cook them up long ago remains a mystery to me.  Well, I know why, but I should have.  Or maybe not, though.  Maybe it was better to let them sit for awhile and come back to them with fresh eyes. And they are good for me now.  I mean, I can see that I really was making good pictures through it all.

And that is what I will do more of today.  Temperatures dropped into the thirties here last night and the day will not be warm.  Oh, it would be bloody wonderful for many of you silly enough to live in the north, but it is bone chilling to us lazy southerners with our slow and languorous ways.

My travel/art buddy got his second vaccination yesterday.  Within the week, all of my eligible friends and my mother will be completely immunized.  My circle of friends with whom I can party will grow from zero to quite a few.  It will be dizzying.

"Hey, do you want to meet on the patio of Enzian and have a drink?"

I'm not sure I even know how to do that any more.  Hell, someone may even want to chat me up, as they say.  I hope she is wearing some wonderful little Chanel outfit like Audrey Hepburn.

Or maybe something from the Summer of Love.

I will return to the deck tonight to see if my bioluminescent friend or foe is still there.  Fairy or fungus?  I know which one I'm rooting for.