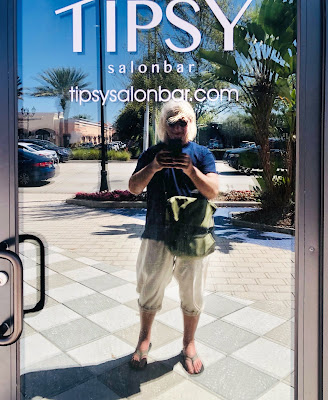 I'm out and about in Gotham.  I am not the only one.  It seems almost normal out there.  What can you do?  The weather is inviting, vaccinations are in arms. . . and new variants abound.  The CDC warns, "You have done what you need to do.  Now do more."  So I've decided to go out in search of violators.  I'm not like the other bats.  I'm your friend.

It is harrowing work, apparently.  I was very tired last night and could not drag myself out of bed this morning until the sun had been up for quite awhile.  I'll have to get my sea legs back, as they say.  First I went for ceviche, gazpacho, and sangria outdoors where I spent my time taking phone photos of my food and the fabulous day to send around to my less fortunate friends.  When done, I managed to stumble around Gotham with a couple cameras in the afternoon after I stopped at the camera store to pick up some film.  While I was there, I chatted with the young woman at the film counter, a semi-Goth photographer who has a shy, understated charm.  I asked if she had been taking any photos and she said she has been doing some street photography.  After a few minutes of interrogation, I told her I was ready to go to NYC.  She said she would go with me.  Be still my heart!  Was she flirting or being nice?  No matter, really.  We won't be going to NYC together, but it sure was fun to hear a female say that.

With a happy heart, I went out to make the streets of Gotham safe for American citizens.

About the costume.  I was backlit which made my hair look platinum and 1980's big.  It is an illusion, a superhero trick. And the bloomers?  I've been working on this outfit for a year, now.  I started wearing them out to the grocers then to outdoor cafes and now straight out into the streets.  I have an endless supply.  I buy them from a weird internet clothing company in China, so I am pretty sure I won't run into another Calypso dancer while out.  I had questioned whether or not I needed a cape, but in the end I decided capes had been overdone.  The Flash didn't need a cape.  Neither did Captain America.

I caught grief for not mentioning St. Paddy's Day in yesterday's post by more than one person.  I just forgot.  And apparently, so did most people.  Gotham was pretty empty as I strolled around into the late afternoon.  A few people in green, but not so many and not so much.  I didn't see a green beer or a trace of The Green Lantern, either.  Perhaps it was the heat.  It is still officially winter, but yesterday the temperature soared into the 90s.  All the while, southern states were being hammered by a strange, gigantic storm.

I also got complaints about my report of using weed killer on my lawn yesterday, but it is the corrupt money system of developers and captains of industry and all their republican pawns who are to blame for climate change, not me.  Even recycling has been turned into a sham.  Until the fuckers can make more money saving the planet rather than destroying it, the destruction will continue.  All the Don't Be a Litter Bug and Smokey the Bear ads aren't going to do it.  We are a small and stupid people, and we will die.

Well, that took a weird turn.  But you know, Batman has his moments.

O.K.  The day is almost gone and I am still in my cave drinking coffee.  It is time to get out and try to save the world.  Selah.