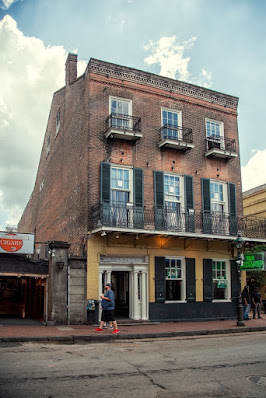 Mosquitoes abound.  L. sent me a news story last night about the influx of new strains of mosquitoes into my own home state.  Mosquitoes are responsible for more human death than any other animal species killing more than one million people each year (link).  That's death.  Many times that are made ill by mosquitos bites from over 2,500 species.  It's not really the mosquito, though, but what it transmits--blood borne diseases.  Microbes.  Parasites.  The works.

Mosquitoes abound in my neighborhood.  An evening on the deck requires repellents.  I try not to use them.  I try to cover up.  But the sort of clothing I wear is not really good protection, and I am usually bitten through my clothing.  I got bitten pretty well yesterday while working in the yard.  We now have mosquitoes that love the daylight.  We have mosquitoes that prefer to live inside the house.  The little fuckers are everywhere--and they are dangerous.

So. . . we talk about pesticides.  The city used to have mosquito trucks drive through the neighborhoods at night spraying. . . god knows what.  The online neighborhood watch letter is now often filled with questions about what happened to the mosquito trucks.  They seemed to have vanished in the past few years.

DDT was banned long ago.  I am sure whatever Monsanto products they might use now to fight mosquito infestations are dangerous, too.  But I am also pretty sure they don't kill 1,000,000 people every year.

I know, I know. . . bird eggs, reproductive cycles, etc.  I just don't want to get Zika because I went outside.

But mosquitoes are only the introduction here.  With everyone now thinking of the terrifying zoonotic pandemics that are just around the corner, there is another, scarier thing that people aren't talking about so much.

Have you noticed the scarcity of oranges and grapefruit this year?  In Florida, orange production has declined by 75%, grapefruit production by 80%.  The cause?  A bacteria from China (link).  Bacteria, fungi, and viruses attack plants as well as animals.  Growing ecological stress from global warming, deforestation, and ever expanding development to house the world's rapidly expanding human populations make agricultural pandemics evermore likely.  Drought is only one reason for declining agroproduction.  Diseases, even in otherwise healthy farm environments, become more prevalent and problematic each year.

And so, as world food anxiety grows, so does Monsanto and the other chemical giants.  In lieu of addressing the problem, we rely more heavily on things that are toxic to the health of both humans and the ecosystem.

Well, there is that.  Meanwhile, I just sprayed my yard with weed killer.  It is much easier than pulling weeds.  I don't have to be in the right to criticize.  I'm ready for the mosquito trucks to come back around, too.  For you see, I believe that the individual can't fix the problem.  O.K.  So you use a lot of water.  You shower, wash clothes, leave the faucet on while you brush your teeth, flush toilets, and water your lawn.  If you are an average American, you use about 100 gallons of water every day.  Not the household, but each member.  Every day.  Horrible, right?  That water, however, is usually treated and put back into the ecosystem in some fashion. Industrial use, however, accounts by far for the most hazardous water pollution.  You can begin to cut down on your shower time and pee outside, and you can wear your clothes more times before you wash them, but the water crisis will remain.  And the amount of chemicals used in agriculture--forget about it.  When they quit building golf courses, I'll quit spraying my lawn once a year.

I think I lost my way here.  While I was writing, a raccoon ran across my deck toward the bowl I use to feed the feral cat.  The cat was watching the raccoon, and I had to go out and scare it off.  Suburban raccoons are a major spreader of diseases including rabies.  My tenant had to go through the series of rabies shots recently.  The raccoon needs to go.

Well, that's today's cheery message.  I have bigger problems than global warming and habitat destruction to solve.  Life is personal, after all, even for Gandhi and Sister Theresa.  I don't relish looking for the flaws in the lives of human icons, but somehow knowing the dirt on them seems to make me feel better.  I mean, I don't want to shoulder all the guilt.