Happiness Is Your Own Dutch Oven 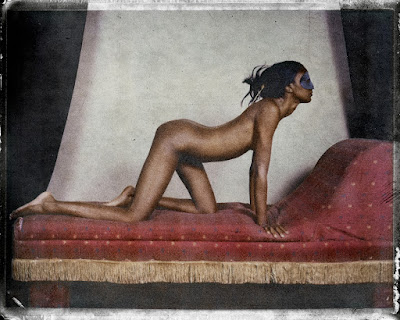 The day trickled by as the one before and the one before that.  But when I went to see my mother, I stopped and got some Dale's Pale Ale.  It is my mother's favorite of the Ales I bring her.  I didn't think I'd drink an entire beer, but it went down quickly.  And then I felt better.

I went home to cook in my new enameled cast iron Dutch oven.  I've never cooked in one before.  Ili had a great one, a giant Le Creuset, and she used it a couple times as I remember, but I never cooked in it, and she took it when she left, of course.  They are very expensive.  Recently I became interested in having my own, but again, as I say, they are very expensive.  Last week, though, my cousin came back from Costco with two enameled cast iron Dutch ovens, one big and one small.  When she told me what she paid, I was floored.  I immediately Googled the company to see if they were real.  The pots are from a Brazilian company with an Italian name, and they got good reviews.  Not as good as the Le Creuset, of course, but "good enough" as the hillbillies say.

Two days later, I had my mother take me to Costco, and for under $60 I had two of my very own.  I was excited to cook with them.  To wit:

Four chicken thighs salted and peppered and braised in olive oil, four minutes per side.  Take out the thighs, put in the chopped onion, carrots, and potatoes.  Five minutes.  Add wine and a cup and a half of chicken broth.  Add oat flour.  Cover and bring to a boil.  Then put the works into the 350 degree oven for fifty minutes.

Adding the flour was genius.  Everything was gravy.  I was very, very happy.

I love the Dutch oven.

Oh!  I forgot to mention that I finished the first draft of The Book.  Making choices was maddening, and I think I lost my way at some point or points.  Initially, I intended to have one photo per facing page, right hand pages only, but there turned out to be too many photos for that.  I halved the number and still ended up with nearly two hundred images.  I had to use facing pages or the price would be extraordinary.  But I am not finished with the editing.  I've sent a link of the digital prototype to my art dealer for her to have a look.  Perhaps I should choose fifty images and go with my original idea, or perhaps pay the price and do one hundred.  I can't do two hundred, at least I don't think so.  Still, so many beautiful or awkward images are not in there.

But copies of this book are forthcoming.  I will order a copy first to see what the quality looks like, and if it is acceptable, I will offer some up at cost to those who have encouraged me over the years.  The idea, though, is to send copies around to publishers and galleries to see if I can get gin up some interest.  I don't really have much confidence, but I DO want to see the images in book form.

I have only dealt with the Polaversion of "Lonesomeville" because those images are so unique.  I have millions of post-Polaroid "Lonesomville" images, though, and I may make a v.2 and/or v.3 and v.4 with them.  But one thing at a time.

As I look out the kitchen windows this morning, I am reminded of the beginning of a short story by Steinbeck.

The high grey-flannel fog of winter closed off the Salinas Valley from the sky and from all the rest of the world. On every side it sat like a lid on the mountains and made of the great valley a closed pot. On the broad, level land floor the gang plows bit deep and left the black earth shining like metal where the shares had cut. On the foothill ranches across the Salinas River, the yellow stubble fields seemed to be bathed in pale cold sunshine, but there was no sunshine in the valley now in December. The thick willow scrub along the river flamed with sharp and positive yellow leaves.

It was a time of quiet and of waiting.

That is what it feels like here and now--a time of quiet and waiting.  I wait, but I must go.  Such is life right now for those such as I.