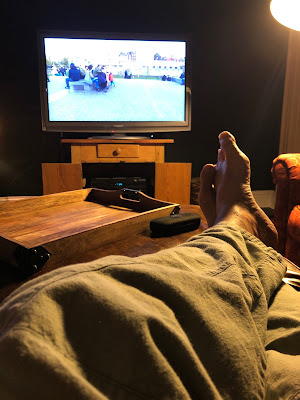 Holy smokes!  Did you read yesterday's post?  Seriously.  I went back and read it.  What seemed inconsequential was really something.  I was trained as a modernist before I was trained as a postmodernist, and I used to teach people to read closely as the New Critics did.  Modernism was very metaphorical and heavy on symbolism, but sometimes in a discussion of  a close reading, people would ask "Do you think the author does that on purpose?" I would explain that some writers, like James Joyce, would write a story, decide on a motif, and then go back and insert images that would work symbolically, perhaps fish as religious references for instance.  But who knows, I would say?  Much of what a writer writes comes from the unconscious.

Did you read yesterday's post?  I went back and read it.  Holy smokes!

Shall I explicate?  Let's look at the possible suggestions of the Dutch oven.  Look at the passage by Steinbeck and the "time of quiet and waiting.  Listen to the song.  To whom do these things pertain?

Perhaps I shouldn't read my own writing.  Bad ju-ju. 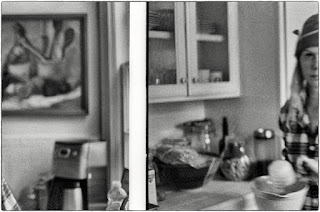 That photo at the top of the page is what I see every night, have seen for over a year.  This is where the magic doesn't happen.  This is where my brains drip out of my head barely noticed night after night after night.  But it is comfortable.  It is home base.  It is what happens when you live like a shut in for over a year.  And still they tell me not to go out.  My own home state has the highest Covid death rate in the nation I just read.  Even the vaccinated must be careful because of variants and mutants which are rampant here.

Just take a look at Miami Beach.  Variants and Mutants, I should say.

I took a camera walk yesterday to finish up the color film in two cameras so that I could drop them at the photo store.  I took the same pictures I always take.  Lousy.  I didn't even finish one roll, just gave up and rewound the film and dropped it off.  Inside, the kids were chatty.  They have rented a small studio together and they are having a photo show coming up.  They are sweet and like to kibitz with me, and I stayed an hour which is the most talking I've done in quite awhile.  The sweet Goth girl still wants to go to NYC.  I told them I was putting together a book.  They wanted to see.  They asked me if I had an instagram account.  They all do.  Nope, I said.  They couldn't understand that.  Of course, I didn't tell them about this site, Batman and all.  I don't even know if I will put my name on the book.  Maybe it will simply come out by "C.S."  I don't mind not being known personally, and I rather enjoy the mystery.

Of course we talked about the cameras we wanted being camera junkies and all, but in the end, I told them that I wasn't taking good pictures and that I didn't really need a better camera; rather, what I needed was to take better photographs.  And therein lies the truth.  I have lost my eye, or so it seems to me right now.  There are so many good photographers now it is oppressive.  I need to up my game.  No more new cameras.

Well. . . there is no hidden symbolism in this post, just the dull thud, thud, thud of the fingers on the keyboard.  There is no danger of some hidden meanings here.