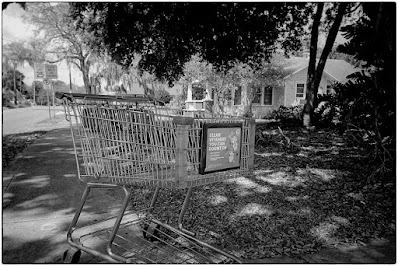 Yesterday was a miserable failure.  I swear, this is not me whining.  It is supposed to make you feel better about your day, your life, like watching a Chaplin movie, or, if you are brave (or stupid) enough, a movie by Allen.  You know, watching the little schlemiel encounter a combination of bad luck and his own incompetence?

The day was grey, damp, and cold.  It is a very different kind of cold here, hard to explain.  You can freeze to your very bones when it is in the 50s. No joke.  My cousin, here from Ohio, can't believe how cold it is at 50.  So I decided to skip all exercise and get on with developing the black and white film I recently shot.  I couldn't wait to see the masterpieces that were waiting there.  It has been a long time since I developed any film, however, and so I had to look up development times which led me down a rabbit hole of internet wisdom on which developers, which dilutions, and which methods are best.  It didn't matter, though.  I knew what I was going to do--undiluted D-76 for the standard time.  It just works.  My only concern was that the D-76 was very old.  But I am lazy, and I decided to try it and see.

So I took my film to the garage and set up the changing tent.  I had trouble finding my developing tanks and reels of which I used to have so many.  Where the fuck?  Oh, back to the house.  I forgot to bring a church key and scissors.  Where was the church key?  I couldn't find it anywhere.  Where was anything?  I grabbed a wine opener that had a bottle opener on it thinking it would be fine.

It wouldn't grab the ends of the film canister.  I pulled my hands out of the sleeves and headed back to the house to find something else.  I searched through all the drawers.  I grabbed something that looked like a bottle opener, but it wouldn't fit on the canisters.  Back to the house.  Where in Zeus's name was the church key?  I grabbed a screw driver and another tool.  Back to the garage.  Nope.  I couldn't get the end off.  I checked the phone.  I'd been doing this for almost an hour.  Back to the house, into the car, up to the hardware store.

The girl behind the counter was young and new.  She wore a Country Club College shirt.

"Hey, do you know where the church keys are?"

She looked confused.  "Just go to the back.  I'll call someone for you."

"You don't have to call anyone.  Just point."

After a bit of discussion, it became clear that she didn't know what I was asking for.  She was trying to get someone who made keys.

She still had to call someone.  This hardware store is great.  They have everything.  Do you need a percolator?  They have it.  A meat grinder?  A Red Rider BB gun?  So I was disappointed when the only opener they had was a big, awful thing.  All I wanted was one of those little stainless steel beer can and bottle openers.  Well. . . this one would have to do.

Back home, back to the garage.  Of course, the unwieldily church key was a problem.  It just wouldn't get a firm grip.  But I was determined.  I would make this work.

Ten minutes later, fingers and knuckles bleeding, three rolls of Tri-X were in the can.

Developing film is fun, though.  Not fun, exactly, but there is a feeling that goes along with it as you imagine the silver negative images slowly taking shape.  Develop, rinse, fix, wash.  Total time around twenty minutes.  I hung the film to dry checking to see that I had images.  Oh, yes, boy-o-boy, I had images.

Before going to dinner at mother's, I cut and sleeved the film, then took them in to scan the lot of them in strips on the flatbed so I had proof sheets.  Another forty-five minutes.  I'd forgotten how much time is invested in this.  But then the positive images took shape on the computer screen, and. . . the usual disappointment.  What in the hell did I take photos of?  And why?  Nothing on the screen excited me.

I packed up and went to dine with my mother and cousin.  Vegetable soup with beef.  Lots of hillbilly talk, tales of hills and hollers and people with unlikely names.  There are a lot of drunks and drug addicts in Ohio, and they are horrible and funny by turns.

Returning home, I went back to the film.  When I cut the film to sleeve it, there were orphans left over.  What I mean is that you have to cut the film into strips of six to go into the plastic sleeves and into the scanner.  Inevitably, there are one or two frames left.  I looked at them.  One seemed better than the others.  I decided to scan it.

It is what you see at the top of the post.  That, my friends, is the culmination of a day's work.  I don't think I have anything better on the three rolls.

And so, once again, I fall out of love with shooting and developing film.  As big a thrill as it is to run rolls of film through a camera, as good as it feels, to work so hard for nothing is disheartening.  If I'd been shooting digital images, I'd know right away that they were bad and wouldn't spend any time on them.  But, of course, working for the images will teach you to be better.  You have to decide if the shot is worth the work.  Perhaps I should keep shooting film and force myself to get better again.  Maybe shooting digital images has ruined me.  The ease of it maybe makes me lazy.

I have several more rolls of color film that I will take in for processing as soon as I finish the last frames.  When I get them back, I will lament the amount of money I spend on the developing, and I will have about the same yield of good images, which, in yesterday's case was 0.5%.

What is it they say about time and money?

So there's my lament.

It is gray and raining again today but a bit warmer.  After a winter that was like summer, it has been a cold and damp start to spring.  The weather affects me greatly.  I have been sad, sick, and depressed for days.

O.K.  Time to quit, for I've slipped over from telling you a comical tale to whining after all.  Shit--even my alma mater lost last night on the last possession at the NCAA Tournament against an underdog.

I'd better check my horoscope.