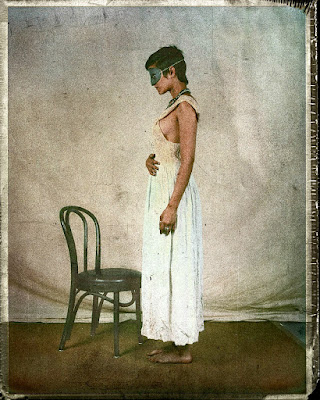 This is one of the earliest works of the Polaroid process I invented.  Mea was a semi-famous internet model from NYC.  I was introduced to her by a semi-famous internet photographer from NY.  They both used to visit this site regularly back in the oughts but disappeared from view many years ago.  The photographer suggested I shoot with Mea and gave her my email address.  She was visiting her grandmother in a not too distant coastal town and said she would try to get over even though she didn't have a car.  She had friends in town she could stay with, she said.  I forget now how she arrived, but I think she took a Greyhound bus and then a taxi to the studio.  I may be mistaken, though.  It was all a long time ago.

When she showed up, I was surprised.  She didn't look like the girl in the pictures.  For some reason she had just chopped off her hair.  She was hung over and tired and wanted to sit out back on the loading dock at the studio and smoke a cigarette.  She didn't do nudes for free, she said.  That's o.k., I said.  I never ask anyone to do anything they don't want to do.  Whatever you feel comfortable doing.  Let's shoot.

Back then, in the early days of the studio, I was only shooting Polaroids.  I would shoot between twenty and forty of them over the course of two hours.  They would be spread out upon a table in the back of the studio so we could see what we had done.  There were no digital images.  There were no good digital cameras then as I remember.  The Canon Powershot was about the top of the line.

Good god, I wish they still made that Polaroid film.  I did that and nobody else knew how.  And now no one will make such images again.

Mea was a really good model for me.  She got what I was trying to do.  There was no glamor in it.  Nothing was sexy or hot.  I think her being tired and hung over helped make the photographs.  She helped me set the tone for the rest of the project.  I wish there were more photos of her, though.  I was new to the process, and of the thirty or so photos I took of her, half of them were unusable.

I don't know if this image of her will make it into the book.  I didn't include it in the first draft, but now I am considering it and some others.

We were going to shoot together again, but things fell apart.  I got a late night call from her when I was in Manhattan once.  She wanted me to come out to Brooklyn and have some drinks with her.  She was on a rooftop, she said.  Things were really lovely.  But I, being the homeboy wus that I am, declined.  It was too late for me.  I am not a night owl.  I hadn't gone to NYC to stay up all night and sleep the next day.  I have never gone anywhere to do that, actually.  I wanted to see and make pictures.

I could never hang with Peter Beard and the Studio 54 crowd.  Well, maybe if I lived in NYC or if I had the money for an unlimited stay, but not on a less than weeklong visit.

Mea is a photographer now and a sailor.  She works on sailboats most of the time.  She remains semi-famous.

On the Homefront.  I saw a pregnant possum on the deck yesterday morning.  When I opened the door, she waddled toward the front of the house.  I have yet to put wire up over the vent spaces there, and I am pretty sure that is where she went.  Bad ju-ju.  I don't want to put the screens up now and trap her under the house, but I don't want her nesting there, either.  I can't just ignore it, though. Nor the car.  It has recently quit starting when I turn the key.  It is not the battery.  I juke around with the steering wheel and the shifter and then something clicks and the car starts right up.  The master cylinder I had installed a few months ago is bad again, too.  I have to take the car to the shop, but I looked up the value of my 2005 Xterra online.  I am at that point now.  It is worth $2,100.  How much should I spend to keep it going?  When should I decide to upgrade?  I don't want to upgrade.  I love the car, but I've been down this path before.  The old Volvo was becoming an expensive wreck when I bought the Xterra.  It was worth so little I donated it to the university jazz station.  They probably sold it for scrap, but that, at least, would get them $150.  I just made a cash donation to them a month ago.  That station is all I listen to when I am in the car.  It is one of the best jazz stations in the country.  If you have internet links to a better one, send them to me.  But I think you will be hard pressed.

I'd better call the auto repair place now and see when they can get me in.  I know they will have to keep the car more than one day.  It seems they always do.