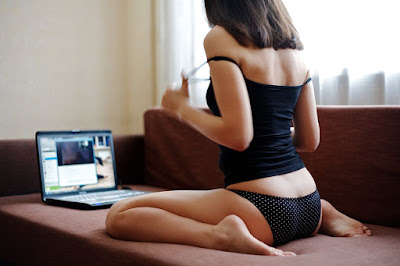 All images stolen from the internet
First off, y'all need to quit asking me for copies of my naked selfies.  I'm not sending them, especially to Q.  He tricked me into signing up for an internet dating website yesterday, and it wasn't funny.  It's called Grindr.  Right away I had about fifty messages.  They were calling me things like "daddy" and "bear."  I didn't understand.  I thought I deleted myself from the site, but when I went to lunch, a fellow came up and started talking to me.  Apparently, I am being tracked and identified by my phone on the site.  I can't figure out how to make it stop, and it has become embarrassing.
This all began when a friend of mine told me she had signed up on eHarmony.  She told me she met someone and deleted her account and started using her private email to talk to him.  She told me she had to end it, though, that he had gotten too possessive or something.  I wondered how one did that in email.  That part seemed really weird.  Later, however, she revealed that they had been chatting on Zoom.  Now I may be slow, but I am not stupid.  You know. . . .  So I looked it up.
(link)
(link)
Yea.  I guess everyone is doing it.  Sex by Zoom.  Everyone's a stripper now.  Everyone is a sex performer.  There is no longer any reason for going to sex sites.  Just get on a dating site or join a Zoom sex party.
Quarantine and isolation have changed many unforeseen aspects of our lives, but one unforeseen effect is that it has forced some of us to expose parts of ourselves that we could have never previously imagined. “I never thought I’d be doing this kind of stuff in such a public way, where I don’t know who’s watching,” Buzz admits. “But it’s kind of like ‘Brave New World' — this is what everyone is doing.'”

“I was just talking with a friend, saying that it seems like everyone is a cam girl now,” says attendee Evelyn. “We are all becoming a bit more exhibitionist just because we have to in order to make that connection” (Rolling Stone Magazine).

Now I understand the whole "possessive" thing.  It's bound to happen.  "Don't be doing this with anyone else, o.k.?"

I thought I'd go ahead and give it a try.  All I saw was a bunch of swinging dicks.  I don't want to judge, but it wasn't my thing.  Still, I can't get the goddamn app to quit following me.  I have to leave my phone in the car whenever I go anywhere.  It is a bother.

And then my mother called and asked me to move a couch for her, and after a visit, I picked up my Friday night sushi and sake.  I did not sleep as well last night as I have been of late, and I woke up depressed.  Not depressed, exactly, but sad, perhaps, or maybe something else.  I can't put my finger on it.  The day has an 80% chance of rain.  I think I'll put on some quiet music and go back to bed.  I giggle at that.  I have no other kind of music.  Quiet music that softens the air and calms anxieties.  I don't want any lyrics this morning, just a flow of notes that waft and wane and soothe the savage beast's breast.  No one ever gets that right.

And no, I didn't really join Grindr.  I don't join anything.  I am not a joiner.  I'll be missing out on the Zoom sex thing, too.  But don't let me dampen your spirits.  You kids have fun.  I'll check in later and see how it went.