A Cold Wind in August 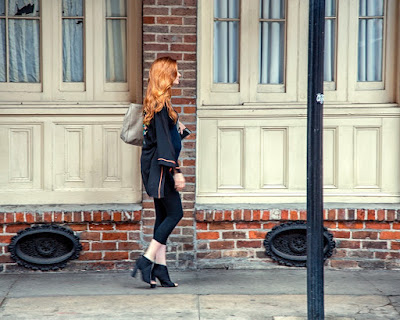 I know I use the phrase too much but. . . holy smokes!!!  You know I have a thing for Lola Albright.  Somehow, through mysterious circumstances and a labyrinth of means, I found out about THIS: 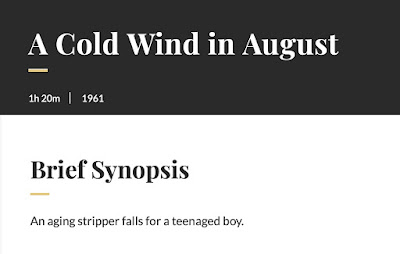 Pauline Kael, the most prominent film critic of her time, praised Albright's performance in the movie.  I went searching.  I found the movie on Amazon Prime for six bucks (link) and then, strangely, on YouTube for free (link).  I watched the YouTube version, but it is pretty low res, sometimes irritatingly so, and knowing what I now know, I might have chosen to pay for a clean, clear viewing.  No matter.  I'll probably go back and watch it on Amazon again sometime.  Albright plays the aging stripper perfectly.  The kid she seduces mucks up the show, though.  He is far too kinetic.  But there is hardly a scene that doesn't feature Albright, and boy can she deliver a line.  Pretty juicy stuff for 1961 I'd say.  The movie was a low budget B grade film, but I think it should be considered a classic somehow.  Maybe not.  Maybe I am just too smitten with Albright.  I am sure I'll take up watching "Peter Gunn" again soon.

I also watched a documentary on Bitcoin and other blockchain currency.  I can't remember the name of it or whether it was on Amazon Prime or Netflix, and I don't feel the urge to go back and look it up.  What I got from the show and from my subsequent reading the past two days is that cryptocurrency is working just like the institutions that it was meant to overthrow except there is nothing that backs up the value of the digits.  That is all it is.  Digits that people are willing to pay for.  Blockchains have a sort of cult following that is understandable given people's predilection for cult behavior today.  It is more fun to believe in conspiracies and revolutions than to pursue science or critical thinking.  The illusion that cults are somehow driven by the populace promises more potential for happiness than the rules of logic.

People need to follow something, it seems.  Or as P.T. Barnum so famously said. . . .

I had intended all day to go to the factory people's party yesterday, but in the end, I couldn't bring myself to go.  Why?  Beats me, really.  Groups have dynamics which require gaming, I guess, the more intimate the group, the more intimate the gaming.  More is at stake in a group than in a mere association.  The more anonymous the scene, the easier it is to walk away.  I think I have just been alone too much for too long to step back into something I am no longer really a part of.

I think not going, though, may have affected me some.  I am dead tired this morning.  I didn't sleep a wink last night.  Anxiety, I guess, brought on by more than mere group dynamics.  Lately the walls of life have felt like they are closing in.  I've accumulated an amalgam of ailments that worry me, but I have an even greater fear of doctors.  Sitting with my mother every day, I hear more stories of death and dying than I have in the rest of my life combined.  I think about it now every day.  Or try not to.  But some nights, the fear takes hold and I jolt to over and over again with a start.  I intuited that I should take something to help me sleep last night, but I've been sleeping so much, I decided it wouldn't be a problem.  It was a problem.

It is Friday and the maids are coming, so I have to begin picking up the messes I have left lying around the house.  I will have lunch with my mother and then, I think, I will pick up some sushi tonight.  I haven't had it for a few weeks.

I may over order just to be safe.