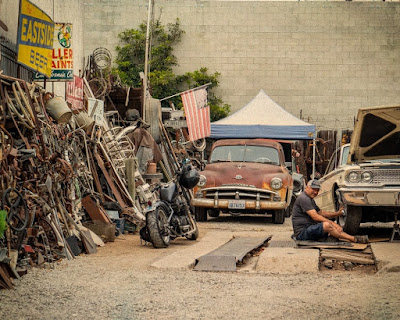 Real men can fix things.  That's why I had Big Balls in Cowtown when I fixed my mother's dryer.  But by this measurement, that seems to be the extent of my manhood.  I'm a putz at everything else.  Oh, I know in theory what should be done.  I just can't do it.  It doesn't matter if it is the car or the house or some space probe, I can usually diagnose the problem.

"Yea, I think it's the injectors.  All the systems around them seem to work fine.  I'd say we just need to replace those and everything will be back on track."

And then I hand someone money to do it.  To wit: I bought wiper blades for the Xterra about a month or so ago.  I was surprised how wipers had changed over the years, and I guessed that I hadn't changed any for a very long time.  You once bought just the rubber blades and slid them into grooves along the arm of the wiper.  No more.  You buy the entire wiper assembly.  The cost is the difference between pennies and dollars.  And when I opened the package, there were a dozen parts that one might need to make this universal arm fit particular autos.  "Bunch of fucking bullshit," as Dana Carvey's son might say.

Somehow, like a blind pig finding a truffle, I was able to attach the new wiper assembly to my car.  I didn't use any of the extra parts.  I was either lucky or I just f'ed it all up.

The first time it rained, the wipers just kind of swirled the water around.  They didn't seem right.  So when I took the car in for some repairs, I asked them to check my wiper blade assembly.  I felt like an idiot, of course, but wouldn't be standing there while they did it, so there was that.

"They sold me 'the best ones,' they said.  They were the most expensive."

"Take them back," she said, always the practical one when it comes to money.  "Tell them they aren't working."

When the shower passed and I was about to leave, I pulled up the wiper arm to try to get the blade back in the track.  When I pushed it, the entire thing came off in my hand.

"Shit!  Look at this crap," I said waving the blade around in the air.  I tried shoving it back into some non-existent groove.  Then I saw some lettering on it.  What I had in my hand was a protective covering for the wiper blade.  "Remove before using," it said.  My shoulders slumped for a minute, then I began to laugh.

"Well, ma. . . if you need anything repaired, you might want to call somebody else."

I read the lettering to her out loud.  She got a real kick out of that one.

"Good thing you didn't take them back," she giggled.

I've only recently discovered what some of the buttons and knobs do in my car, too.  I have controls inside the car for articulating the rearview mirrors.  I've had the car for more than ten years and have just found that out.  There is another knob that I am not sure what it does when I rotate it.  I am beginning to suspect it has something to do with the headlights.  What other wonders might the old car hold?

Last night I ordered too much sushi.  I went large, but I couldn't eat it all.  I ran out of sake before I ran out of food, something that should never happen.  When I finished, I came inside and turned on the news shows that I recorded, watched about two minutes of them, and turned the tuner over to YouTube.  Nothing caught my interest, so I decided to watch another movie that had Lola Albright in it.  It got some very weird reviews, but she won an award for her role as Tuesday Weld's pill popping cocktail waitress mother who ends up committing suicide.  "Lord Love a Duck" was shot in 1966, and Albright is only in a few scenes, always with Weld, and though she is still attractive, the screen is not hers.  Albright got a late start, I think.  Most of her good rolls were given to her long after she was in her thirties, so that sultriness she was so good at playing didn't get the run it deserved.

And that, friends, is how I partied on Friday night.  And you?  I'm sure you are out again living the vida loca.

Warm weather prevails across the entire U.S. today if you can believe those weather maps.  Many of you will be out at nursery's and farmer's markets.  I just checked, and it looks much the same around the world.  Perhaps the market streets in your own home town will be flooded with people once again, at least where the vaccine has been reasonably available.

Me?  Oh, I'm just going to do some handy work, you know. . . repairing and replacing things.  Maybe I'll give the shocks a go.

Better yet,  maybe I'll just go get a good breakfast.