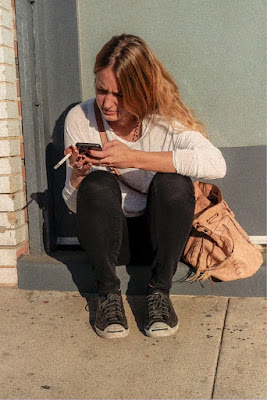 I took two big hits of a hard drug, Advil PM, last night, and this morning I am in a fog.  I know I should take only one (though two are the recommendation on the label), but I intuited that last night might have been troublesome.  Well, it wasn't.  I narcotized myself into a sweet oblivion.  This morning's hangover, though, makes it seem hardly worth it.  I do not like being so immobilized in the sunlight hours.  I am full of regret.

Tonight could be worse for the old bones and nerves, though.  Full Blood Moon, eclipse, etc.  You might poo-poo me on this, but I have been writing about full moons since this blog began back in the early 1900s.  Even before that, my journals and emails were full of them.  And owls.  I used to have a great number of owls around.  I used to alert people to the oncoming of the full moon.  Now, of course, the news outlets do that.  Not so when I began.  So. . . once again, I believe the Times has been reading this blog.  As a result, I don't write about them so much any longer.  Full moons, I mean.  I still write about the Times.

Oy.  I can scarcely focus on this page.  My eyes are cloudy and I keep drifting off into reveries.  I've been subject to much associational thinking of late.  The fact that a friend is in Chicago triggers memories of being there and then memories of conversations with people who told me stories of being there long ago when I bought my first house in a wonderful starter neighborhood and whatever happened to the couple across the street whose wife I called "Ghost" because she rarely came outside and was very beautiful and who had a handsome husband who attended to her like a patient and who was from St. Louis and had been in the same fraternity as Brad Pitt who he said was not even the best looking fellow in the house and who might have been equal in looks to Brad and was well-built and sometimes trained at the same gym as I and another fellow on the block who was part of another young couple and there was the fellow from Texas who was young and married, too, and we all used to stand out on the sidewalk and kibitz in the late afternoons with beers or cocktails and everyone's wives were beautiful and we thought it would always be this way until each and every one of us ended up divorced.

And then you get trapped in your own head and become haunted by your thoughts because you have been living alone in isolation for so long that you've developed a malady, you are certain, that you cannot break free of and though you try to get out people's company is more irritant than stimulus and you even quit writing to people much which makes them feel slighted in some way and they think perhaps that you are a prick and not that you are depressed and mid-level catatonic and have relied too much on drugs and drink to carry you through the evenings and nights.

Which feeds the isolation and strange malady.

And then, of course, you focus on the physical ails that plague you and seem to grow worse each day and you start to feel terror at what lays ahead of you the way you once felt joy at the possibilities and the internet seems plagued by pictures of aging beauties like Bridget Bardot and you begin to wonder why god hates us so.

And you get stuck in the feedback loop and can't get out.

I must have read that somewhere.

I sent this opinion piece to c.c. today, but I don't think he liked it (link).  It mirrors, however, what I have been saying for a long, long time.  Postmodernism gave the far right more tools than it gave to liberals though it was touted by liberals in the academies first and gave way to a snotty, insider's language that alienated them from the masses.  Conservatives don't use the tools of deconstructionism correctly but it sure benefitted them to use them partially to promote their own platforms and agendas.  They used it in the way the merchant class capitalized on the early explorers opening up the blank spaces on the map.  They exploited it.  And they need not refer back to the primary source, need not reference Derrida or Foucault, because they are not liberal academics.  They only need the raw materials from which they can pilfer what they need.

I never developed a real appreciation of Foucault beyond his perversities, if you choose to call them that, but like Hockney said, there is not enough Bohemia any more.  No, he did not quite say that.  I am sure, however, that that is what he meant.

But now there are more similarities between the right and the left than ever, and now that Trump is not in office we can question the source of what he called the China Flu just as he did.  And now we can admit that we have an illegal immigration problem on the southern border, just as he did.  The flaw in the logic is that just because someone is evil you can't imagine that he can ever be right.

We are living Elliot's dream of a Waste Land.

O.K.  I need to attend to myself.  Obviously.  I have a termite guy coming in a few minutes and then I must call for a plumber.  I probably should walk around beforehand and get some air and freshen my thinking.  I have obviously tumbled here.