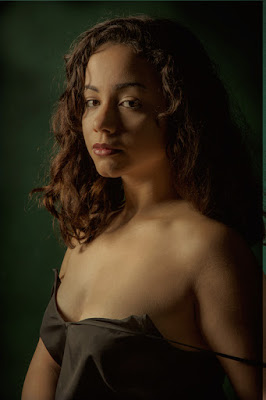 I sold some photos yesterday!  Well, I didn't.  My art dealer, L., did.  I am only capable of spending money, not making it.  It is my particular talent.  I have the a sort of inverted philosopher's stone.  I am one of the few who know how to turn gold into lead.  It's not as hard as it sounds, really.  I'm sure I can help you do it.  It works about 99% of the time.

I was informed of the sale of the prints just before I got some other news.  The tenant came over while I was relaxing with my mother on the deck after dinner to let me know that I have three problems at the apartment.  The kitchen sink won't drain.  There is barely any water pressure.  And--drum roll--the clothes in the closet are covered in termite wings.  Hey-hey!  Today I call a plumber and a fumigation company.  A dollar comes in, a hundred go out.

I am cursed.  Truly.

That is only the beginning of my woes, but that is enough for now to give you a chuckle.  I don't wish to be the Yasar Arafat of the blogosphere.  That Yasar was always good for a laugh.

Let us focus on the finer things.  I made a ginger/soy fish dish for my mother last night.  I couldn't find the recipe I used before and had to concoct it from memory and some other recipes I found that were not very similar.  It turned out fine.  Good, actually. . . once you got used to it.

More good news.  I think I might have a chance to go back to work at the factory.  Oh. . . I wouldn't be a foreman.  I'd be working on the floor.  The pay wouldn't be the same, of course, but I would be on a temporary full-time contract that would give me benefits. I would have to work twenty percent more hours each week to earn them.  Sort of like overtime without the pay.  I would be able to make back part of what I lost when I pulled my money out of the market when it hit bottom, however.  I could put on my little blue uniform and keep those floors clean and those machines a-runnin'.  I mean, in the end, I might make enough to pay for the bathroom disaster, repairs to the apartment, and have enough left over to redo the deck.

It is further proof that the cosmos loves me.

But what does love a broken old man?  It is the old choice between getting a lumpy, arthritic old dog or a wiggly little puppy.  God save the children, they say.  Do you know how many old men jokes they made on the season finale of Saturday Night Live?  I didn't watch it, of course, but I do watch some clips on YouTube, and there were plenty there.  Old white men seem to be fair game for comedy.  There's nothing funnier.

Perhaps that is why so many men are changing their identities.  A quick internet search tells me that the numbers overwhelmingly favor males transitioning to female in the trans world.  It is the old cry for help.  "Dear god, get me out of this mess."  But no worries.  All old men are transitioning anyway.  At some point, it is just impossible to tell the difference.

I watched two documentaries on harems last night.  They were made before we Woke, but it seems that we have badly misunderstood the old harem's of Turkey.  It was not permissible to enslave a woman born to Islam, they said, so most of the women slaves were captured Christians.  They were favored for their fair skin, light eyes, and fine bone structure according to the reporters.  But life wasn't all bad.  They were taught to read the Koran and how to be good Moslem women, how not to show anger, how to walk backwards when leaving a room, etc.  And they learned embroidery.  The documentary made them seem empowered.

Alas, early in the 20th century they were banned.

The ever changing morality of human beings is fascinating--unless you are one.

Maybe I should go back to work at the factory.  I believe I am coming unhinged living a solitary life of disaster and doom.

I could shuffle from place to place irritating people with stories of the past.

It's either that or start throwing rocks at passing cars.

Still, there are people who bought some of my pictures.  A simple exchange of values.  Those are people who know that the road to hell is paved with unbought stuffed dogs.