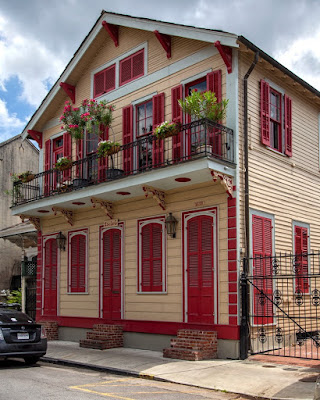 Old houses are for young people.  That is what I was told by the man from whom I bought my house.  He was old and I wasn't.  I laughed.  Now. . . I understand.

Yesterday was a real hoot.  First the fellow from Terminix came.  The news turned out to be as good as it could, I guess.  Flying ants, not termites.  The apartment will not need to be tented.  They are coming out in a little bit to begin treatment.  Cha-ching.

Then the plumbers.  There were two of them.  As you know, water has not been my friend.  I took the plumbers around to explain what was done when I found the leak a month or so ago, then they got to work.  There was little water pressure in the upstairs apartment.  The reason?  Sand.  Sand had gotten into the faucet.  Solution?  Buy a new faucet.  Same thing with the shower head.  Then it was time to clear the drain in the kitchen sink.  Whoops.  They did not have the right snake.  My house is old and has copper pipes.  They are not as wide as the new pipes, I guess.  Well, they suggested, they could go through the vent on the roof.  They didn't want to go up there, but I made light of the danger telling them tales of roofing the apartment.

"Man, it is flat up there.  You can practically dance."

But I found a leak while they were working.  The tub.  They said they would need to get a couple parts.  Then another faucet in the garage.  Buy a new faucet.  Same with the one in my house.

My day will consist of buying faucets.

This takes care of the most urgent needs.  There are many, many other things.

Ah. . . there's the text from the bug man.  He is en route.  I can track him.  His name is Donald.  He will be here in thirty-nine minutes.  I will need to speak with him.  He is treating the outside of the apartment this morning.  He told the tenant it will take longer to do the inside, that he will have to drill holes in the walls to insert the bait.  I wasn't told this would happen when I met with the inspector/salesman yesterday.

The weather is still holding here.  Although the temperatures rise into the nineties in the afternoon, the air has been dry and there have been breezes.  The skies have been clear.  I did not go out to look at the moon last night.  That is a big confession.  I just didn't.  I watched a program on meditation and let the faceless voice guide me into what became unconsciousness.  Just listening to my breath.  I will continue with the program again today.  I need to clear my mind of dread and anxiety.  I don't know if that can happen, but I will try.  I've gotten out the measuring tape, and by far the things that are challenging me are greater than the things that make me happy.  I'm actually having trouble finding happiness at all.  I don't want to burden anyone with my troubles, and you should find only humor in this.  You should feel fortunate and think about your own happy places.  Don't overlook anything.  Keep those happy places close.

O.K.  I have to get ready to greet Donald the Bug Man.  Such is my intimate social life.