Barbecue and That Little Horse 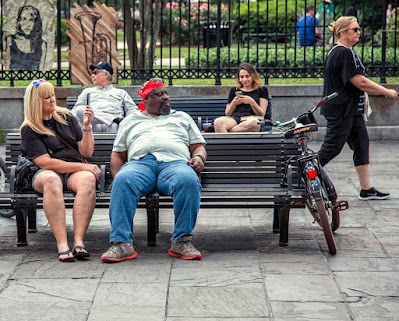 That little horse--nobody expected it to win.  The trainer didn't.  The jockey didn't.  They only had one hope.  That little horse (and it is small) had never been passed when in the lead, so the jockey gave it the lead and it never let go.  It was really fun, almost beautiful.

But what toll did it take on the poor little thing's body?  I hope they gave it plenty of good drugs last night.

I had my mother over for the derby and barbecue.  I had bought a week's worth of meat to grill--pork loin, sausages, chicken thighs and chicken breasts, and a rack of ribs.  It was my first time grilling ribs. Difficult to believe.  My mother said to boil them first.  Really?  But I listened to my mother.  I let them boil for about ten minutes before I seasoned them and put them on the grill.  I put on the potatoes and started boiling water for collard greens.  Then I poured us the sangria I had cooked up from a bottle of sangria.  I added canned fruit and topped it with champagne.  Damn, damn, it was sweet and good.

I burned just about everything on the grill.  The sausages were charcoal, the chicken blackened.  The ribs were just a tad overdone but the pork penis--I mean pork loin--was done just right.  The potatoes were good, but the collard greens, oh my, they were delicious.  A barbecue with collard greens is something else.

We were finished eating before the derby came on, and my mother excused herself saying she didn't want to drive home in the dark though it wouldn't be dark for quite awhile.  But it was o.k.  I had a lot of cleaning up to do, before which I would bag daily portions of bbq meat and put them in the freezer.  I did this last week, and it was a dream.  Each morning, I take out the evening's meal to defrost, and I swear, after I heat it up, it tastes like it just came off the grill.  It makes my retired life easier.

I wrote friends during the derby.  Nobody I knew was watching it.  I sat with my whiskey alone in the house thinking of all the spectacular places I had been watching derbies of the past.  At first, it happened by chance, but later, I made sure I was someplace good.  One year, my buddy had a friend with a horse in the race.  We were going up to party with him at all the invitation only parties.  One night before we got there, he called to say he was chatting up Bo Derek.  Long story that I have told before, but we didn't make our flight and didn't make the derby.  That was the year of the Atlanta Olympics, the year of the Gold Club stories.

I have many stories surrounding the derby.  They roll through my head like a freight train right now, but I have already told a good number of them, and others would take too long.

After the race was run, I took my whiskey and a cigar to the deck and pondered things.  Another Saturday night on my own.  Too much whiskey and a mother's little helper and an early bed.

I feel like shit this morning.  I refuse to look in the mirror.

Maybe I'll have some bbq for lunch.  And some meditative yoga.  I need to quit shaking.  I need to chill.  Gentle music for the day.  No lyrics.  Just something in the background.