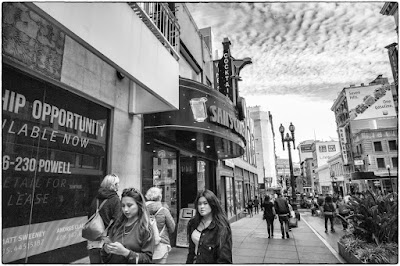 I want you to imagine a place that makes you very happy.  You don't have to think about the details.  Rather, just the feeling of the place, the colors, the light. . . whatever it is that makes you happy.

That was what the disembodied voice was telling me last night in my guided meditation.  I came across it on Netflix.  It was something they were recommending for me based on my other interests, I think.  I tried the first one a couple nights ago.  All I had to do was breath and listen to my breath.  The entire thing was rather hypnotic and I fairly passed out until the voice brought me back to consciousness.  Last night I tried part two.

You might not imagine it hard to think of a place that makes you happy, but I was having some trouble.  There were so many, but they often were tied up with other baggage.  I could think, for instance, of particular places along the Pacific Coast Highway, but then there would be thoughts of a woman I had loved who no longer loves me.  Scratch.  On to another.  And another.  Finally, though, I rested on a mountaintop on a cool and sunny day.  Not a particular mountaintop, but a sort of amalgam of mountaintops I have experienced over my life.  That worked.

But the mind wanders, and you are not to struggle to stop it but simply to let the thoughts go and to bring your attention back to your breath.  O.K.  But I was thinking of Gwyneth Paltrow doing ayahuasca in the South American jungles and her hippie meditation ways.  And I thought of Goop.

Odd, right?  But you see, I was having a conversation about luxury just the day before.  The concept fascinates me.  People have a need for luxury.  That seems contradictory in some way as luxury is supposedly beyond need and in the realm of desire.  But I think not.  I believe luxury is a basic instinct in humans.  It is why primitive people adorned themselves with beautiful shells.  It is why people went to church in the Middle Ages.  It was luxurious, the gold patina, the paintings, the leaded windows.  It is why people will pay fifteen dollars for a crafted cocktail.

It is why they buy a fifty dollar candle from Goop.  It is not a trip to Versailles, but it is something.  I cannot laugh at people who buy those products.  It satisfies a need for luxury.  It makes them feel something they need to feel.  It scratches some psychological itch.

This was the noise in my head as I tried to focus on a place that makes me happy.  Then I was suppose to feel the sunshine enter my body, first through my feet, then up through my calves into my thighs, etc.

It wasn't working last night.  I couldn't feel the sunshine.  But the disembodied voice told me that was o.k. and I shouldn't sweat it.  Learning to meditate takes a while, but the benefits to my body and mind are still active.  Of course.  Perhaps I will try episode two again tonight rather than going on half-cocked.

It is fine.  I don't feel those twenty or so minutes are wasted.  Rather, most of the rest of my day is.  I have become quite good at wasting the day this year.  If I am going to sit and stare, I might as well meditate.

I bought my mother some Castor Oil.  It was delivered yesterday.  It is luxury Castor Oil.  Organic.  Expensive.  It is supposed to restore hair growth and my mother says her hair is getting thin. When she opened the package, we read about all the benefits this oil used for thousands of years can bring.  We rubbed a couple drops on our skin, she on her arms, me on my face.  In a few moments she said her arms were tingling.  So was my face.  We sat and waited for something worse, but nothing else happened.  We were intrigued.  I think I might buy some for myself today.  I told my tenant about it, and she is anxious to get some, too.  I told her to see if they sell it on the Goop website.

That made her laugh.