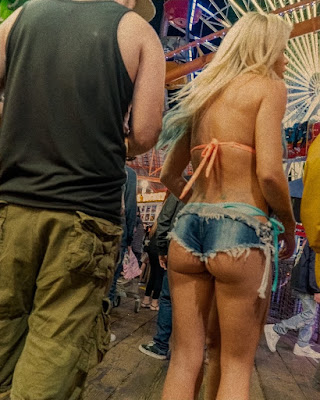 You may think this photo sexist, I know.  But would you be right?  I mean. . . what if this were a tranny?  They seem to be able to get away with a lot more in the liberal world than others.  Take a gay burlesque show, for instance.  All that "femme mystique," right?  Nobody is telling them to quit it.  In the liberal quarters.  Trumpers just call 'em faggots and beat the hell out of them.  Still, the question stands.  What if this were a tranny?

To wit: Q gave me a good phrase this morning--Transgender Earth.  Why need it be "mother"?  Why gender-ish at all?  When will the Woke get going on this one?  I should say.

Would you feel different (about yourself) if you were looking at boy butt?

But, of course, you can always pin it on the pervert who took the picture.  What can I say?  Everybody loves the carnival, right?

Or should I say Carnivale?

There is nothing that gets people worked up more than sex. . . except stolen elections, and somehow Trumpers were able to get the two interconnected.  You know, the whole pedophile cabal tied to Hillary and the New World Order.  That is why the liberal media keeps focussing on Gaetz and the potentially seventeen year old.  I want to see the tax payer's tab for this one.  Just that part.  How much money is it costing tax payers to find out if Gaetz had sex with a seventeen year old hooker or not.  Excuse me.  Child.  Do you think a million would cover it?  No?  How much?  And in the end, do you think he will be convicted and sent to prison?  No?  Yes?

Not even Trump would pardon him, though. Gaetz was silly to ask.  Trump only pardoned people who have committed crimes that benefitted him.  Your political support is not nearly enough.  Like they say in Texas, boy, down here you're all on your own.

Funny thing, though--Blacks and Hispanics have five times the abortion rates of Whites in Texas.  You shouldn't think of the new strict abortion laws there as anything but an effort to increase the minority population of the state.  Consistency, you know, is the hobgoblin of little minds.  You must be able to hold two opposing ideas in your head at once and not go mad.  That is the sign of genius.

I'm not certain, though, that they are going to let them vote.

No.  Leave it alone.  Everything makes perfect sense there.

Let's just keep our eyes pinned on the problems of the Royal Family.  They make for much more entertaining t.v.  And what is it that we really want?

Right!  For Meagan and Harry to come out as trannies.  Seriously.  Look at them.  Tell me you haven't thought of that before.  They are, by their own admission, both beset with terrible psychological traumas.  Let the kids be free. All we want is for them to do it on the television.

I can't wait for the next season of "The Queen."

Dear Jesus. . . what was that?  I'd better get a tighter grip on myself or C.C. will have to use the leaches.  He has a jar full, but he says he only keeps them for emergency use.

I suspect, however, that he may be hoarding some Adrenochrome.  I've always imagined he has ties to the cabal.

* This story has been updated.  To be transparent, Q came up with both the terms Transgender Earth and Terra Tranny.  I want no responsibility for these obvious slights.