A Week of Weird Documentaries and Photo Experimentation 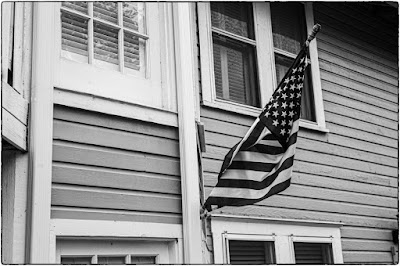 I'll show you the result of my Black Cat Liberator camera work in a minute.  I don't want to put it at the top of the post.  As you will see--meh.  After working for hours to make the picture, I just don't know what the attraction is.  I mean I do, but I don't.  This flag photo is from my Leica Monochrom.  It didn't take hours, and the images that come from that original Monochrom look pretty filmic.  As I looked at the most recent photos I took with it, I wondered why I didn't use it more.  But I remember now.  Printing black and white on an inkjet printer doesn't work out that well.  They don't pop, not unless you set up a printer with special black and white inks made by John Cone, and they are hard to use and very expensive.  So if you want to display the images, the options are set up a special printer or send the digital files out to a lab that can print digital photos on photographic paper in a darkroom.

But I know why I want to use the large format cameras.  They have a "look" that you can't duplicate with a smaller format camera.  For me, the question now is, "Is it worth it"?  I have a bunch of large format film and glass plates that I will shoot in the coming days before I decide to sell or keep the camera.  But I know I will keep the old Monochrom.  And I may set up a printer with special inks to print the images.

Yesterday, I gave a photogravure print to my travel/art buddy for his birthday.  It was a photo I took of the San Francisco of Assisi Mission Church in Ranchos de Taos, New Mexico.  An image search with Google will show you a hundred pictures of the church that all look pretty much the same, give or take the sky and angle from which it was photographed.  I mean, it is famous, so. . . .  But my photogravure, I feel, is another thing.  This is an old process involving the making of a photographic plate that is inked and run with select paper through a printing press.  Each image must be made by re-inking the plate and doing the process over again.  I chose to print the church image with a brown ink to capture the color of the clay.  I think it is a nice image.  I made only two, and I'm keeping one for myself.

The reason for mentioning this is that monochromatic prints run through an inkjet printer look better if they are tinted a bit like a duotone.  I may do some experimenting with that today, but I think I need to set up a printer for only black and white.

What?  What was that you asked?  Oh. . . "Halston."  I watched "Halston" on Amazon last night.  I'd already seen the movie.  This is a documentary that covers the same territory.  I don't know why I watched it.  Halston represented just about everything I despised about the seventies.  I can't muster up a bit of sympathy for the fellow.  But there was a bit of music I liked in the doc.  And I'll share it here.

It pretty much captures the era in sound.  However. . . .

There is just something very appealing about the early sixties.

Let's review what I've watched in the past week or so.  Bukowski, Crumb, Incels, a pornographic cartoonist, a nude go-go club, a schizophrenic writer, and a gay megalomaniac who died of AIDS.  It's been a hell of a week.

Oh. . . here's that photo from the Liberator. 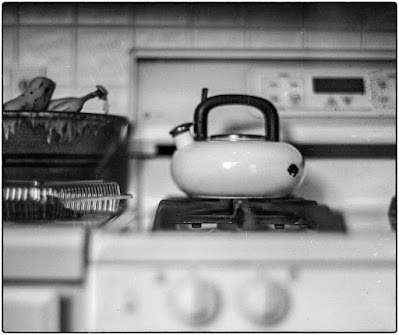 I wasn't going for interesting.  I was just testing the exposure settings, the focus and that particular method of development.  The negative is streaked and otherwise marked for some reason.  Maybe I'd feel better if I took a photo of something more interesting.  I am going to run some glass plate tests today and see how they turn out.  I've had nothing but trouble with them in the past, but I have several boxes of them and they were expensive, so. . . . If I keep at it, I should know in a few weeks if I really want to use the Liberator or sell it.  If I sell it, I will be 1/5 of the way toward the money I would need for that digital Hasselblad with a lens.

O.K. Busy day.  I need to do my photo stuff and exercise before I go to get beautified this afternoon.  I'm demanding that she makes me blonder today.  And I'll go on my summer diet.  It is too hot to eat a lot of meat.  It is time to become ropey and svelte.  I will lose twenty pounds and look as lovely as a. . . oh, you know.