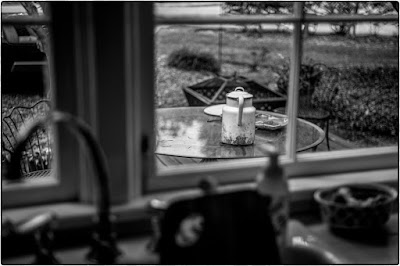 This is just to say

I mean, yesterday was o.k.

So I thought to start today with a little silliness. I am, by many accounts, a silly guy. All those desultory documentaries I watch and the literature of emptiness I read don't effect that. I have the antidote. I counter it all with sweet, inconsequential things.

To wit: yesterday, I got blonder.  My hair was looking too natural.  My mother liked it.  A woman in the salon liked it.  My beautician even liked it.  But, she said, maybe she should brighten it up a bit.  Yes, I said.  Make me bright.  And oh, boy, did she.  I'm bright like the sun now, a ray of sunshine in this cloudy land.  She was afraid that maybe she had made it too blond and was going to tone it down, but when she rinsed it out, she changed her mind.

Oh, yes. . . I feel like the cover of a fashion magazine.

When I got to my mother's house, it was later than usual.

"Wow, you sure are blond now," she said.

I felt it was too late to cook a meal, so while we chatted, I ordered takeout sushi.

When I got to the restaurant on the Boulevard and exited the car, I heard a voice call my name from across the street.  A female voice.  I turned in anticipation.  There was a woman calling to me and waving.  "Come over and see me after you pick up your food," she said.  Then I recognized her.  It was the woman who used to manage the sushi restaurant.  I went in to pick up my food, and they knew who I was right away.  One of the kid waiters asked me, "Are you Peter's father?"  For some reason I said, "Who?"  Why would I ask that?  It mattered not.  I mean, no matter what the name, the answer was the same.  My response still puzzles me.  Was I really curious to know whose father I wasn't?

When I left the restaurant, I walked across the street.  The woman gave me a big hug and said, "I saw your hair. . . ."

She was now managing a new restaurant right across the street, an Italian joint.  She knew the family, she said.  Right out of somewhere in New York like that meant Italian.  Old family recipes.  Yada yada yada.

"Well, if I ever get a date, I might come for dinner," I said holding up my takeout.  "Right now, this is all I have."

The hair is one thing, but a date is another matter altogether.

When I got home, it started raining, so I set up dinner in front of the television.  I tried the news, but Erin Burnett is impossible to watch without derision, so I hit a button on the remote.  It was the wrong button.  It took me to HBO.  I have been paying for HBO for years, but I don't seem to watch it anymore and I keep meaning to cancel it.  Since it was purchased by somebody new, the content is more like commercial television than the arty stuff they used to produce, things like "Deadwood" and "The Wire."  I landed on a movie and left it on for a minute. Then another.  Then I was in.  "This Is 40," it was called.  A romcom.  I haven't watched a silly movie like this for many, many years.  But I was hooked.  It was Judd Aptow's wife Leslie Mann that did it.  I couldn't look away.  I'd never seen her before.  Was she a real movie star?  She didn't look like a movie star, but she was good.  I looked around to make sure nobody could see me watching.  I mean, it felt fairly shameful.  There were times I laughed out loud, again, looking around like someone would catch me.  I was having fun.  A guilty pleasure, you know, one I wouldn't tell anyone about.  Sushi, romcom, wine, and whiskey, all the while shining like cover of a glamor magazine.

I needed this.  I really did.

There were hiccups in the day, of course.  Driving to the beauty parlor in a terrible tropical downpour, my driver's side windshield wiper came off.  It just came off the arm and fell in the valley between the hood and the windshield.  These are the ones I wasn't sure how to put on, the ones I asked the mechanic to check, the ones I had left the wiper covers on for months.  I immediately turned off the wipers to keep the metal from scratching the glass.  But I was on a busy four lane highway and couldn't see shit.  I slowed down and tried to stay between the lane lines, slower and slower as I saw brake lights ahead.  I looked in the rear view mirror and for god's sake there was a cop behind me.  This was bad.  I bent my head to the bottom corner of the windshield trying to get some unsmeared version of the world, my heart racing, adrenaline flowing.  I made it to the stop light where I had to make a turn onto a busier six lane highway.  Fuck me, fuck me.  That was my mantra.  I had about a mile to go.  Get into the right hand lane, I thought, and just go slowly.

I have two glass plates sitting in a tank of developer right now.  One hour stand development.  I am expecting nothing.  I have not had luck with this in the past.  I didn't try anything cool or artsy.  I just shot some things outside the house, just tried to get the proper exposures for this ultra slow glass plate emulsion.  I probably didn't.  But I'll know in about half an hour. 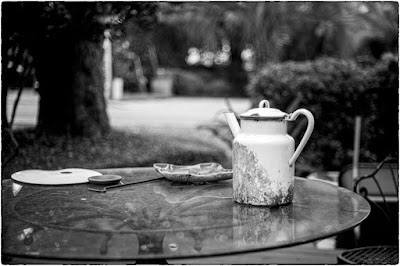 And tomorrow, you will, too.