I Must Get Out 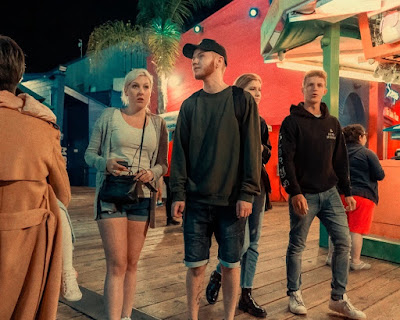 O.K.  Just need to keep you informed of my television nights.  Need to.  Because I have relatively little else.  But Holy Moses! (as young, hip medievals used to say), you gotta see this one!

And the trailer doesn't do it justice.  I can't believe I haven't seen or heard about this until now.  Have you?  I thought I had my finger on the pulse or something, but this one got all the way by me.

Interesting to those of you who are Anthony Bourdain fans, it might have been this movie that killed him in that Asia Argento, who made a film based on one of the novels, had her affair with the teenage boy on the set which ended in Bourdain paying half his fortune to the fellow so silence him.

All I know is that life is a lot weirder than I imagine, and I imagine it to be weird a lot.

Stay tuned to see what I might watch next.

Yesterday, I decided I had to do something.  I can't continue to sit and wither and whine.  Can I?  I probably could, and maybe should. . . and probably will.  Whatever to that.  But yesterday I decided I would try to use my big old Black Cat Liberator camera once again.  I've never been very successful with it, and it takes a lot of time and energy to shoot with it, develop the few sheets of 4x5 film I expose, unload and load the film holders, and then see that I got basically nothing.  But I had an idea.  I wanted to try stand developing the film.  It was sure to work, sure to give me better results, so I spent an hour reviewing the camera's operation just to make certain I had it down.  It is definitely not a point and shoot camera.  But yea, I remembered all the moves, so I went to the garage and loaded some film and came back to the house, set the camera on a tripod, did some metering, and shot four sheets--two indoors with very low light, and two outdoors where it was bright.  All I had to do on the exposures was guesstimate, I figured, as stand developing would compensate for any mistakes.  That is what I read.  After that, I had to mix the developer, Rodinal, in a very dilute form.  When that was done, I let everything sit.  I had things to do.  It wasn't until I got home from visiting my mother that I developed the film.  You just let it sit in the dilute soup for an hour, rinse, fix, rinse--done.

Of the four sheets of film, two came out.  Curiously, they were both from the long exposure indoor shots.  Neither of the ones I shot outside had an image.  WTF?  I can't figure that one out.  I left the negatives to dry over night.  I will scan what I have today and see if they are in focus.  If not, I am sending the camera back to its maker, John Minnicks, and telling him to sell it.  If they are, I will load up more film and try again.

Hours of work for two images.  Why?  After I hung up the negatives to dry, I started looking at the digital medium format Hasselblads again.  I think I could get a camera and one lens for around $10,000.  That seems fair, right?

Sure, there's something wrong with me.  But wait 'til you've watched all the documentaries I've been posting about for the last week before you judge.  There are a lot of fucked up stories in the world.  Mine's just one of them.

We have hit the rainy season here.  Every afternoon, if things work out.  If not, we will bake.  Everything will turn brown.  And then. . . hurricanes.

I will take more photos today.  It surprises me how long it has been since I've taken any.  In the beginning of the pandemic, I walked with cameras every day.  But I started to feel a vast nothingness in looking at the people-less images day after day after day.  No shit.  I got spooked.  I felt a vague nausea and had to quit taking them.  I couldn't stand to look at them.  I still feel that way.  But the urge to shoot is beginning to overwhelm me.  Still. . . the streets scare me.  I don't know that I will be able to approach people like I used to.  The hordes are in arms, angry and mean and criminally motivated.  I get yelled at just for carrying a camera let alone pointing it at people.  In the old days I wouldn't worry, but I couldn't take a beating now.  The old confidence is gone.  I can't give people the crazy eye now, the one that used to save me.  Yesterday, though, I had the idea of dressing up in drag to go out and shoot.  People don't yell at a woman with a camera as much.  But I would have to get a wardrobe and drive to distant towns.  The writer William T. Vollman did that.  And he liked it.  And now, by and large, he lives his life in drag.

I probably won't chance it.