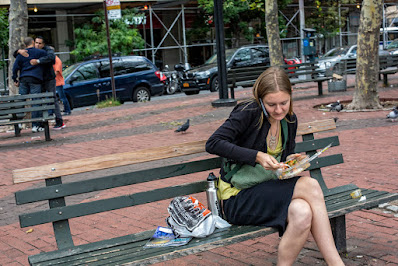 In choosing a photo for today, I, for the first time, looked at the bench rather than the woman eating lunch. Like most people, I understand immediately the subject of the photograph.  This, for me, was a symbol of America's forced work ethic--a quickly grabbed bite during the lunch half-hour, choosing to sit outside for a few moments awkwardly balancing a plastic container on one thigh while talking to mother.  OK, maybe a boyfriend, husband, wife, girlfriend. . . whatever.  But today I looked at the bench.  It is the exact color of my deck.  AND IT IS PAINTED!  Most of it, anyway.  One replacement board on the backrest is not.  I need to find out about these boards.  Are they pressure treated?  If not, how can one be left unpainted?  If so, how can they be painted?  My deck has rotted from the inside out in too brief a time because I painted pressure treated boards.  That is what I have learned.  I am going to have to begin replacing boards if not the entire deck.  I don't want to replace the entire deck, and have decided to prolong the ordeal by taking out the rotten planks.  There is a problem with that, however.  One of the struts in the middle of the deck is rotten.  I'm going to see if I can overcome that problem for a little while.  I'm not sure if my idea will work yet, but before I find out, I have to get sixteen foot boards to the house.  I have no way of transporting sixteen foot boards, so that will be an added expense.  I went to Home Depot and looked at the price of pandemic boards.  Each 5"x16' (x2") is $37!  It is crazy.  And it is why I don't want to replace the entire deck right now.  I've chosen six boards that must be replaced for safety's sake.  I will replace everything when the pandemic prices fall.  Maybe they never will.  Who knows?  The world is at its maddest in my lifetime right now.  There is no real sense that it will get better soon.  We learn to do with less every day--fewer birds, fewer frogs, fewer fish in the sea. . . .  But there is more of some things, for sure--plastic in the ocean, CO2 in the atmosphere, violence in the streets. . . .

It is Gay Pride month.  So my iPhone announced yesterday.  It reminded me of an incident at the factory quite a few years ago.  The school was putting out annual calendars, and the Equity Coordinator who happened to be a Black woman, was in charge (I feel funny capitalizing Black but not woman for some reason).  She was a close ally and good friend of mine.  When the calendar came out, their was a ruckus.  Each month on the calendar featured one of the factory's departments, one of those stupid group photos that the media guy shot for the purpose.  And each month celebrated equity and diversity.  June was Gay Pride, but the department featured in June was not pleased.  Indeed, they were dismayed and complained to the CEO.  Oddly enough, the department featured was HR.  When my friend told me of the trouble, I laughed and said, "Hell, I'll be in the photo.  I'll get so and so and so and so and we'll all hold hands and smile."  The so and sos I mentioned were not all gay, but we would be happy to be June's boys.

In the end, though, the calendar was not distributed.  They simply threw them all in the dumpster or incinerator or something.  It was the Year of No Factory Calendar.

I was on the Diversity Committee from day one.  We met, went on retreats, talked and talked and talked for years.  Little changed.  And what I learned in those years is that if you don't have friends who are not like you in race or creed or religion, it is all mouth service.  We pretty much know the way things "should" be.  We have two voices, one public and one private, and we know where to use each.  The way things "should" be, however, is not necessarily how we want things to be, and in the end, I pretty much despaired that a diverse nation would ever work.  When Obama was elected, I told my Black friends who had grown up during the Civil Rights Movement that it was over.  It was done.  Things would be different from now on.  They looked at me like I was looney.

"Sure White boy.  Everybody loves one another now."

I didn't know how they could be so cynical.  Then came Trump.

My Black friends taught me much that I could never have known without them.  One of the things I learned was that Black people don't want to talk about being Black all the time.  They don't absorb every little thing that is about Black culture.  That is a thing liberal White people do so they can show Black people how liberal they are.

"Oh, hi Tercel.  How's it hanging?  Hey. . . did you see that piece on CSPAN about what was happening to Black people in Mississippi in the sixties?  No?  Oh, man. . . it was awful.  Not the show.  No, I mean the way Negroes were treated back then.  You should see it.  I was moved, really."

Then, after the liberal has left: "Yes, sir. . . I need to watch CSPAN to know about how bad Black people are treated."

Sorry to tell you, people, but Blacks don't talk about it as much as you probably do from your privileged position.

But liberals are trying, so we have Black Awareness Month and Women's Awareness Month and Gay Pride Month. . . you know, just so we're aware.  I fear, however, that the effect is the opposite of the one intended.  What I mean is that people just get weary.  CNN and MSNBC have bent over backwards to show how liberal they are.  Their ratings jumped during the end of the Trump administration, but since Biden has been elected, they have dropped.  There is only so much awareness people can stand.  Eventually, people weary of awareness and just want to watch something dumb on t.v. and get some really good ice cream.

It was easy for me.  I hated all those southern crackers like George Wallace and Lester Maddox and their little league followers who hated my ilk and wanted nothing more than to torture and oppress me so much that I naturally sided with the "other."  If you didn't feel oppressed growing up, however. . . I understand. Privilege has its pleasures.

Now I have practically given up hope of a diverse population living together without strife.  People like to live with the familiar.  They may like visiting the unfamiliar, like the occasional music or eating at the restaurant, but for the most part, after a while they want to go home.  Not everyone, of course.  There was Lawrence of Arabia and Richard Burton and Stanley Livingston (just kidding, trying to trick you there), but even they projected their values onto the "native population."  People take home with them wherever they go.

Such it the real problem with immigration.

But enough of that.  I'm not really wanting to do any work on the deck, but I must.  I used to work, and my days looked like that lady in the photograph.  Now I don't, and I don't want to.  I don't want to do much of anything.  And if pandemic prices weren't so high, I might hire someone to do the job.  But I'm a man and must do my manly duties, or so it seems.  I will figure out how to get the sixteen foot boards home and I will do some deck repair.  It will turn out wrong, of course, and sooner or later someone will have to fix it. But that is the way of my people.  Half assed repairs are just part of my culture.