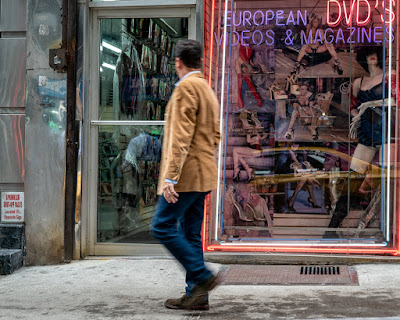 Some of you may believe that this blog is true, that it is like a daily journal.  You would be making a bad assumption, I think.  My life is neither as exciting nor as boring as this blog would indicate.  Every day before I write, I have to think about what to leave out.  I mean, man. . . I could spill.  But that isn't the point.  Even my journal is constructed.  Things are exaggerated for effect, altered in the sake of interest.  I like to make the mundane more so, the horror humorous, etc.  In the main, life is much more horrifying than any of us want to let on, even when we are crying.  We are told to focus on what's good about it, to revel in the sounds of birds and the simple pleasures that surround us.  What I am learning about meditation is that it is much more of the same.  When bad thoughts or pain arise, try to let them go.  Think of something positive in your life. . . .  Studies show that this is good for one.  We all know that, though.  Otherwise we'd all be mad.

By and large, however, that is the problem I am having with meditation.  There is nothing profound there, unless you consider the simplest of concepts profound.  In my latest meditations, I'm supposed to envision the people who irritate me (or worse), in a happy place.  I'm supposed to project happiness onto them.

I can't.  I have tried for three nights, and it seems impossible.  All the happy talk irritates me.

Yes.  Yes.  That is what we do.  It is part of survival.  I learned that long, long ago.  Back in hippie times, before EST and before people charged money for yoga, I learned that it was wrong to judge people, so I didn't.  What a mistake that was.  At the time, I decided that intuition was a mystical thing, a faulty concept, so I would put it aside.  Later I realized that intuition isn't mystical but is the unconscious stored experience that lets us judge whether something is dangerous to us.  I don't mind going by my first impression now.  It saves me grief and anguish and it costs me nothing.

I've decided that in my meditations, instead of imagining those people I don't like as happy, I will just envision them disappearing, just evaporating like steam into the atmosphere.  That gives me a bit of peace.  Maybe one day I'll evolve, but for now, it is the best I can do.

I've gotten into a bad habit during the Time of Covid.  I Google people.  It is awful what you can find out about people on the internet.  When I'm bored, I'll go to Mugshots.com.  That's fun.  I'll look up people and find out where they live now.  Then I'll use Google maps to look at their house.  It is terrible.  I'll find Facebook, Twitter, and Instagram accounts.  Sometimes I find obituaries.  It all began when I found that my first love had died.  From there on, it was just an evil way to pass time.

Sometimes I look at the Twitter and Instagram account of an old love who is famous in her industry.  She has a younger, incredibly handsome husband and a cute little girl.  She has had an amazing ride.  Yesterday, I went to one of her sites.  She was writing about her inner journey, her frustrations and her meditations on love and life.  Yay.  She felt so good about it, she wanted to give people advice.  Oh my god.  No shit.  It was like reading Rod McKuen or Kahil Gibran.

I will imagine her becoming steam tonight.

One/I must remember to stick to the descriptive, avoid the prescriptive.  Everyone wants to be a sage.  It is best to avoid the Prophet.

Oops.  That didn't take long.  It is impossible to perform the theory, it seems.

Irony and cynicism--that's the stuff for me.

"One true sentence," Hemingway said.  He meant "be descriptive" I think.

Given my current state of pissing (on and off), and given my dictum, I cannot recommend a book to my friends because they will reject it out of hand.  Hell, almost all my ideas are being rejected by them.  Devils are in my third house or something.  I don't know what's going on.  So, I will just drop my recommendation here.  I am reading Sam Shepard's "The One Inside."  It is killing me.  From the N.Y. Times Book Review:

Sam Shepard’s elliptical new book, “The One Inside,” is labeled a work of fiction, though its hero — a writer and actor who lives in a place that sounds an awful lot like Santa Fe — bears more than a passing resemblance to the author. As his friend Patti Smith writes in a foreword, this character (“a loner who doesn’t want to be alone”) is, simultaneously, Shepard, “sort of him, not him at all.”

There you go.  I've been trying to send myself a passage from my Kindle, but for some reason it keeps crashing on my Apple computer.  I'm sure Apple has done something to make this happen.  I've had to take a screen shot. 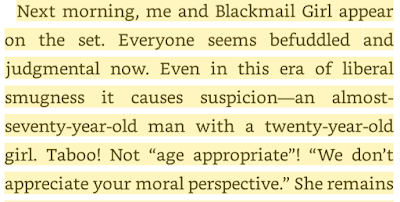 I've left out a lot today.  Be thankful.  That is what I am learning in my meditation practices.  Be thankful. Be grateful.  Be generous toward others.