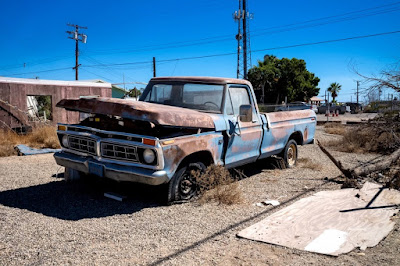 I went to dinner yesterday with only the 4th person I have seen out since the pandemic began.  It was he I believed had given me Covid early on.  Now I'm not so sure.  He told me that he got Covid at Thanksgiving.  It was severe.  He ended up in a Remdesivir trial (for which he was paid $3,000).  So maybe it wasn't he who helped ruin my life after all.

We met for the Early Bird Special, dinner at 4:30.  Well, drinks at 4:30, dinner at five.  I have fallen in love with the early dinner.  The woman I went to the museum with does as well, and she is not old.  I think Dinner at Four could be definitely cool.  Staying out late now is for perverts and decrepit drug addicts.  The beautiful people are all in bed by nine and up with the sun.  So I've read.  I've always been this way.  My motto has always been, "Nothing good happens after midnight."  But midnight is too late for good health and a beautiful, shapely figure.  All science shows that exercise and early bed are important for a healthful mind/body relationship.  That's what all the Hollywood stars do, now.  It is not that you can never have the occasional hit off the crack pipe or the odd snorting of heroin.  You just do it early.  Q recommends doing LSD first thing in the morning.  Otherwise, he says, you'll be up all night.

The problem is, however, now that it is chic to dine in daylight, you can't find an Early Bird Special, at least in my own hometown.  I should be saving a lot of retirement money right now, but from what I hear, I'd need to move to a retirement town where they still have such things.  Here, in the heart of a mundane middle class metropolis, "Fugit about it."

I met my friend at the bar.  I don't really do sit down tables unless there is a large group.  I hadn't seen my friend in over a year.  There was a lot of catching up to do.  He is moving to the Middle East.  I think I've already mentioned this.  He has a three year contract, so I'll probably be dead by the time he comes back.  I mean, I probably won't see him again unless he returns for some holiday.  He probably will, but I prefer the melodramatic approach.  Why not?

There were a lot of good specials on the menu, but I was boring.  Chianti Classico, Arugula salad, Spaghetti Carbonara with chicken, Sambuca, and a scotch.  We talked our way through several hours, so we tipped our barman well.  Within minutes, I was home.

And exhausted.  I still feel socially awkward having little practice at conversations this year, and throughout the course of our meal, the restaurant became very crowded.  It made me a bit jumpy when some man would bellow or some woman cackle, and there was a sternly beautiful waitress, obviously disturbed by some great internal turmoil, with a crazy tattoo on one arm, a sort of Asia Argento type, who had to pass by us a hundred times.  Each time, my innards would contract, and though she wore a perpetual frown, I swear she was looking at me from the corner of her eye.  Oh, mock me if you will, but I know these things.  She probably was thinking she would like to stick a fork in my bicep for laughs, but I don't believe I am wrong about the glances.  Even if I am only imagining it, though, it sapped much of my energy during the meal.  Just nerves.

When we left, she didn't say goodbye.  Not even an almost imperceivable wave.  Maybe she's just shy.

When I got home, the cat was waiting on her own dinner, so I poured a scotch, lit a cheroot, and sat with her on the deck while she ate.  By eight, I was on the couch.

Oh, the couch, that lovely, luxurious couch.  I've recently taken to lying on it while I read.  It is deep and wide, and the buttery leather cools or warms you depending on your need.  I propped myself up on two large pillows and settled in with more "Submission."  When I woke, it was midnight.  I must have put the novel down for a minute to think on a passage or to rest my eyes.  I didn't want to get up, but my neck was starting to kink.  I knew I had to.  With great trepidation, I made my nightly concoction of oral contraceptives, brushed my teeth, and took a "'Nite All" to assure I would make it through the night after my late, long nap.

The bed was glorious.  Each time I woke, I was "strong like raging bull."  Was it my little Argento?  Or maybe the Sambuca had some hand in it.  No matter, each time I'd fall back into some dreamful sleep.

I have never felt comfortable in crowds and have always felt a tension in social situations that is hard for me to explain, but now that has been exacerbated by isolation, age, and a physical brokenness.  I don't think I have a party in me any more.  Maybe.  Just for awhile.  And then the sweet collapse.

I had better eat my wheat germ today, though, for I must party again tonight with my mother.  I am grilling a rack of baby back ribs I bought on our frenetic trip to Costco the other day.  Ribs and slaw and beans, I guess.  Early.  No late eating for us.  It is not that mom goes to bed early, however.  She is a night owl.  She often stays up until midnight.  So do her friends.  Whatever.  That generation has a different juice.  They are all around ninety and don't look like they are running out of voltage any time soon.  My generation is already in decline.  Too many chemicals in our youth.  Too much plastic.  Too much Monsanto.  It is probably Monsanto that has me on the couch.  That lovely couch, soft and so deep.  I have plans for a good afternoon read today while the brutal sun mercilessly bakes the dying lawns and wilted shrubs.  AC, a cool couch, and. . . zzzzz.