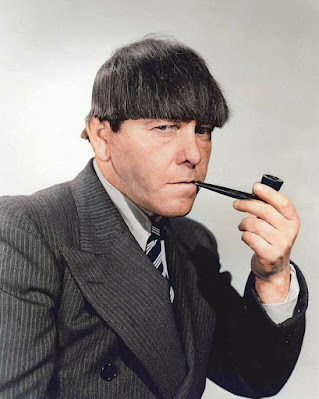 Dr. Mo, head of psychiatry at the Department of Mental Health.  Apparently.

Last night, as I prepared my evening meal, I pulled a fork out of the drawer and brought it outside to the grill.  Then I glimpsed something, words engraved on the fork's handle.  What was it?  I had to go inside to get my glasses.  When I returned, a shockwave ran through me.  WTF? 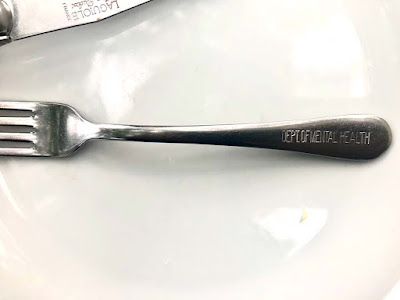 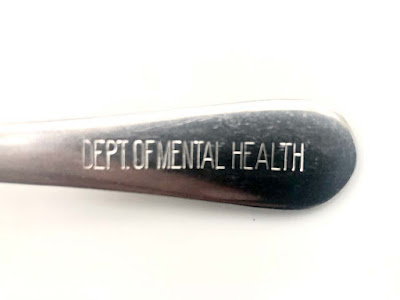 This was a joke.  But how?  Where in the hell had this thing come from?  My mind raced.  Did one of the maid's crew leave it by accident?  Who else had been in my house lately?  Mr. Fixit?  He was a little nuts and he was here every day for a long while.  The guy who serviced my a.c. unit?  He is definitely nuts.

Or was it Ili?  Did she leave this?

It was a mystery that I couldn't solve.  I was flummoxed.

I got my phone and took pictures.  I sent them to all my friends.

"I shit you not!  I pulled this out of the fork drawer tonight.  I’ve NEVER seen this before WTF?!?"

"Message from your past for your future."

"Damn. That's from back in the days when they still used metal forks at the insane asylum!"

"Maybe it was a message from Ili."

Then I got a message from my art dealer.

Oh, boy. . . she thought that was really funny.

"Fuck.  I just sent that message out to everyone."

Well. . . mystery solved.  All that is left is to find out if they do have metal forks in the asylum.  And to issue an apology to Ili, of course.  I don't think she was ever actually institutionalized.

After dinner, a cheroot, and a scotch (or two), I settled down.  Except for watching the news, which I barely do any more, I don't turn on the television until eight o'clock or later, and I try to be in bed a bit after ten.  I try to watch educational things and, of course, whatever camera porn I can find.  Last night, I watched something on Wittgenstein's theory of communication and then one of those YouTube photography guys who compared two different scanners.  But I was anxious to finish watching "Boiled Angel," a doc about the only artist ever jailed for creating pornography--right here in my own home state. I had never heard of him, so the documentary's ending was a surprise.  He's become quite well-known and has major shows and representation in The Big Apple.  It was a difficult doc, however, for his comics are really disturbing.  Nobody outside of a few hundred people, however, would ever have seen them if the state hadn't decided to prosecute him and bring him national attention.  Deciding how to react to that. . . well. . . I still haven't completely.  It is a difficult moral test.

After that was over, it was too early for bed, so I queued up another, this one called "Red Dog," a tale about the life of the dancers who worked in Oklahoma City's infamous Red Dog Saloon.  I made it about forty minutes before I decided to go to bed.

I need to quit watching all these things before going to bed, though.  I didn't sleep worth shit last night.  What happened?  I had cut my drinking, started reading and meditating prior to going to sleep.  I guess I got turned around when I started going out with friends again.  Maybe that.  Maybe not.  When I woke at four this morning, though, I lay in bed and thought I need to begin a regimen of self care.  My climbing buddy gifted me a massage session that I need to use.  I will get a facial.  I will spend evenings drinking herbal tea and putting exotic lotions on my body.  Thursday I see the beautician.  I will pamper myself for awhile.