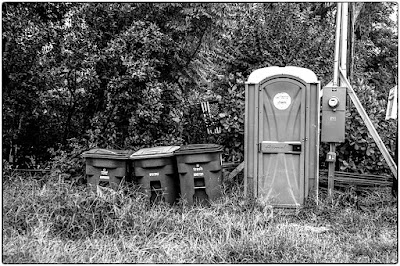 I'm at my mother's.  Again.  For awhile.  Yesterday, mid-morning, I got a call from her.  She had fallen, she said.  She thought she had broken her shoulder.  The other one.  I jumped in my car and went right over.  When I got there, she was covered in a towel.  She had just finished swimming in the neighbor's pool and had gone into her own back yard to get a garbage can.  She had tripped on a stepping stone and gone down.  She is 89, now with one broken shoulder and one that has more metal than bone. And she got up.  Went into the house.  Took off her wet bathing suit.  And called me.  I wrapped her in a robe.  I was going to drive her to the hospital, but I decided trying to get her up in my Xterra was not going to work.  I called 911.  They sent an ambulance.  I told her I would meet her at the hospital.  Of course, the ambulance and the fire truck in front of the house had attracted the neighbors.  I told them what had happened.

When I got to the emergency room, they gave me a badge with my picture on it and let me walk back to her holding room.  I was surprised that they were so loose in the time of Covid.  I got to the room just as she was being wheeled in, at the same time as the doctor.  We stood in the hallway and I explained what had happened.  He looked her over and ordered X-rays.  They had given her a shot of narcotics, so she was in less pain than she might have been.

Then the long wait.  After an hour, they wheeled her down the hallway.  An hour and a half later, they wheeled her back.  She said that the techs moving her arm for X-rays had been brutal.  An hour later, the doctor came in and said her shoulder was broken in the ball of the ball and socket.  He didn't think it would require surgery, but she would be seeing an orthopedic doctor in the coming week and they would decide.  He wrote her prescriptions for Percocet and Flexeril and some Lidocaine patches.  They put her arm in a sling and patched up the wound on her knee, gave her her first Percocet, and then we waited for half an hour to see if she would have a reaction.  Then they discharged her.  I ran to get my car.  When I got back to pick her up, she was sitting in a wheelchair in a robe among a bunch of rowdy what I could only guess to be drug addicts.  Not a hospital worker in site.

"What the fuck?  They just sat you on the sidewalk and left you?"  I was left trying to get her up into the truck on my own.

We stopped at the drugstore to pick up her prescriptions on the way to her house.  After a lot of computer work, the pharmacist said that insurance would pay for the Percocet but would not pay for the Flexeril or the Lidocaine.  The patches, she said, would cost $300, the Flexeril $26.  She said that the Lidocaine patches were 5mg, but on the shelves they had over the counter patches with 4mg for much less.  She could have it all ready in fifteen minutes.

WTF?  How does an insurance program determine they won't pay for prescribed drugs?  Medicare and a good prescription package from AARP.  How the fuck?  There is something very wrong with medical coverage in the U.S.  Very, very wrong.

"How much do you think today cost?" I asked my mother.  We guessed around $15,000, but we may be low.  We'll see soon enough.  They ran every test they could while she was in the hospital, took X-rays of everything on her left side.  Precautions, sure, but they are also doing what they can to pay for the machinery of the place.  Good and bad.

I got my mother set up at her house and then ran back to mine to gather my things.  I will be at my mother's once again for quite awhile.  I've spent much time here in the past few years.  A lot of broken bones between us.

I hadn't eaten or even had a drink of water all day.  I stopped and picked up that seafood pasta dish I had been thinking about, a bottle of wine, and a bottle of scotch.  I had the essentials now--coffee and alcohol, my phone and my laptop.  I picked up some comfort food, too.  My mother said she wasn't hungry, but I knew she would need something.  She enjoyed the comfort food as much as she could enjoy anything. She called relatives to let them know.  She took her pills.  I made her laugh.  She would be fine, I said, but not for weeks.  She was displeased.  She had just started swimming again.  Her 96 year old neighbor, a woman who lives alone, had invited my mother to use her pool any time.  Well, I said, she would be back in it in a few months.  Now she just had to heal.  The intense pain would subside little by little, and in a week or two, walking with the sling wouldn't be as painful.  We would take walks until she could use her arm again.

Fortunately, I have a Firestick on my mother's television.  She never uses it, but I wasn't going to be watching commercial television.  I brought up Netflix and we scrolled through trying to find something to watch.  "Blacklist."  Seven seasons.  Maybe we might both find something of interest in it.  We tried the first episode.  Neither of us loved it, but what the hell.  We watched a couple more.  By eleven, I was ready for bed.  When I woke up, my mother was sleeping in a recliner, the same one I slept in for months after getting run over.

It is Sunday.  Everything is familiar.  Everything is strange.  I have coffee.  I've read the news, such as it is.  And now, I've made my post.  My mother is still dozing.  Little rain is forecast today.  I wait to see what the day will bring.