I got a late start yesterday as I do most days now.  By the time I had done my family duties and headed out the door for my house, it was nearly noon.  O.K.  I was ready to take the big camera out for a spin.  I grabbed some film holders that I hoped were loaded with Tri-X film.  They might be.  They might be loaded and already exposed.  They might be loaded with color film.  They might not be loaded at all.  I have tried working with the Liberator so many times and have failed and gotten frustrated so many times that whatever is or is not in the holders is always a mystery to me.  I do not have a good system.  So, I said, I will just shoot whatever is or is not in here today, develop whatever there might be, and then start again.  With a system.  Things will be marked and cared for.  If there was nothing at the end of the day, I said, it would have been a good training session.  I made some adjustments to the cheap, 3D printed 4x5 back on the camera, put a thick carrying strap on the camera (after searching long for the proper attachments), and hopped in the car for my distant destination.

Oh, boy. . . the day was hot and humid.  I was still feeling the effects of the sleep aids from the night before.  Sweat popped out on my forehead.  I set out.

Using the camera was easy.  It's a beauty.  I used an app on my phone to meter my shots, set my aperture and shutter speed, cocked the shutter, removed the dark slide, framed the shot, and. . . click.  I put the dark slide back, took the film holder out of the cheap plastic back (which I expect to break), turned it around to the second side, locked it in, and headed to the next place.  It is the sort of thing that will make you appreciate a digital camera, but there is a beauty in all of it, too.

But, wow, the sun was beating me down.  I felt like puking.  One o'clock in the afternoon is not the outdoor photography time here and now.  It is nap time.  It is mimosa time.  It is anything time but lugging around a bunch of photo equipment in the sun.  I know there is a saying about that, but I can't bring it to mind just now.

I had been walking on deserted streets for the most part, but the way back to the car was on a busier road.  As I walked by a union hall, I decided to take a photo.  As I got ready, two fellows walked by.

I explained to him that it was. . . once.  He was very interested.  Another fellow coming from the other direction stopped.  He was interested, too.  I could see that this was going to be a camera that would inspire curiosity.  People would want their picture taken with it.  As I explained the camera to the last fellow there, I said, "Here, let me take your photo.  I'll send you a copy."

That was the last photo of the day.  I fell into the car and headed home.

Where exhausted, I dropped into a coma.  I didn't wake up until very late in the day.  I needed to make dinner for my mother, but I wanted to develop the film.  I called her to tell her I'd be a bit late.  I opened a beer hoping it would give me strength.  I headed to the garage to load the film into the developing tank and get the chemicals. The first holder I opened had film.  The second did not.  I was two for four.  I opened another film holder.  There was film.  Four for six.  The tank only holds four sheets of film.  I trucked everything back to the house and began the souping process.

I expected nothing.  That is what I had gotten so many times before.  But what I hoped for was something brilliant.

After developing, rinsing, fixing, rinsing, with mixed emotions, I opened the tank.  Two of the film sheets were opaque.  Just black.  The second two. . . holy shit!  Images.  I pulled them out and looked closely.  Well, there were two images on each.  I had already shot them.  They were double exposed.  O for six.

But hey--I knew the camera worked.  I mean, one of the images was one I had taken that day.  Why were the other two black?  Beats me.  But. . . I was almost excited.  There was still hope.

I went back to the garage and loaded the emptied film holders.  They have fresh film.  I know what is in them.  Today, once more, I will give it a go.

My god, what a lot of work. 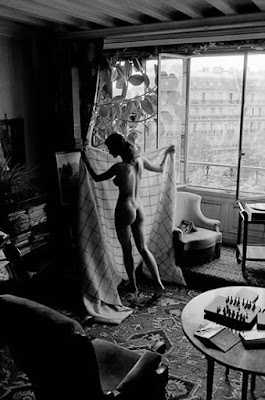 There are more explicit ones, but I rather like this.