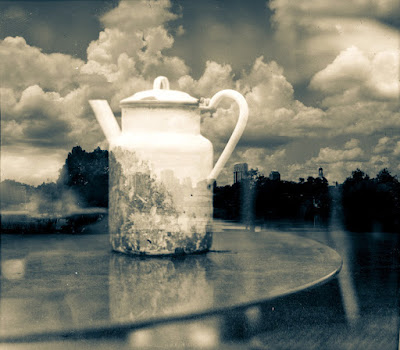 Well. . . here is the first mistake, an unintended double exposure using 4x5 film.  I think either photo might have been nice.  Despite the mistake, I almost like it.  The big surprise to me was that the modified camera does not make a 4x5 negative as advertised, but a 3.5x4 inch one instead.  About that, I'm a bit disappointed.  I was hoping for the whole shebang.

I loaded up more film yesterday and set out to make some photos.  It was bright and sunny. . . until I got to my destination.  Then the skies clouded over heavily and storm clouds circled.  Since I was only running a test to see if I could make everything work, I just shot a couple pics around my yard.  Then mixed chemicals.  Then loaded them into the developing tank.  Then I souped them for the appropriate time.  And then. . . voila! 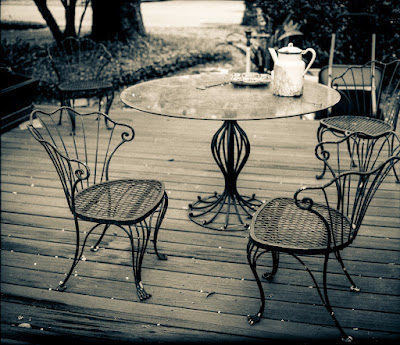 I got an actual image!  3.5x4 inch perfection.  The camera works.  The converted back works.  The chemicals were right.  There were no light leaks.  The viewfinder is almost accurate in framing and focusing.  "Almost."  And so, after hours and days, I produced a less than mediocre picture.  I couldn't have been more pleased.
Then, after scanning it and tweaking it in Lightroom, I looked at it for awhile and decided I could probably have done this with an iPhone.
I sent Q a link to an article about a Magnum photographer who now works solely with one (link).  Q wrote this morning that the article has convinced him to get the newest model.  I guess my images weren't enough to convince him to work with the 4x5.
Still, I think the photo has "a quality."  Just stick one of Sally Mann's daughters in there and you'd have something.
I'll try making some portraits and see if the whole thing is going to work out.  Meanwhile, I have a bunch of medium format film to develop tomorrow.  We'll see if they turn out as well as an iPhone photo.
Sometimes you just have to do the wrong thing.
WE NOW INTERRUPT THIS BLOG FOR BREAKING NEWS!
I think I have finished putting together the book "Lonesomeville."  I say "finished" because I can't really see it any more.  It has taken a long time and I am becoming blind to it.  I can no longer understand my original intention in ordering the photographs and I am tired of trying to come up with something new.  I have put it together digitally on a bookmakers website.  I need to write an introduction to it, then I am going to order a copy.  I am using the best paper and book cover and bindings they offer.  There are almost  200 photos.  That may be too many.  Because of the cost, I have placed them on facing pages.  Perhaps I should cut the number in half and use only the right hand page, but I think I will leave it as is until I have a hard copy in my hand and then decide.  I have left out the more explicit photos much to the dismay of some who have proofed it, but I am a bit shy about that.  I have enough images for a Vol. II if I decide to include them later.  Those are simply the Polaroids, of course.  I can make Volumes III-X with the digital images.  I was a maniac for a few years, but you know what they say--you do best what you do most.
But "Lonesomeville," the book, will be available in the coming months.  And for anyone who comes to the blog who is interested, I will make copies available to you at no cost.  Wait--that's not right!  I will make them available at the publisher's price without a mark up. . . meaning without any money going to the photographer.  I don't expect many requests, so it is not really a big deal.  I will buy a few copies of my own to send around to galleries and publishers just to see what happens.  I am prepared for disappointment.  That is what I tell myself, anyway; still, you know how that goes.  You can never completely inure yourself to disappointment.  But, as the kids used to say in the bad old days, "Whatever."
I like that as a title.  I will try to develop a project around the concept.  Right?  It is reductio ad absurdum, I think.  It applies to the ideological state of the world today.  It might have wings.
Whatever.
Posted by cafe selavy at 9:15 AM