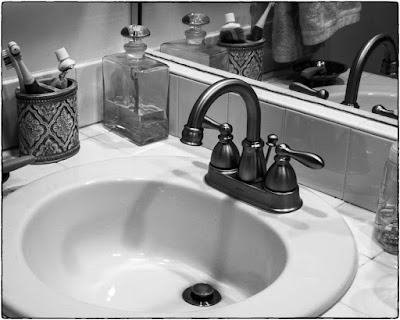 That's right. . . I'm down to photos like this.  WTF has happened?  What has become of me?  I've loaded up a bunch of 4x5 film holders.  I'm going out to shoot them today.  I swear I will.  And develop them as well.  But of what shall they be?  Twisted metal?  Highway overpasses?  Miscellaneous garbage?

Apparently that is not a word.

I promise myself that today is an experiment, and if it works, I'll begin taking portraits.  People pictures, I mean.

Here's the camera.  It is the one I used for all the Pola Lonesomeville pictures.  It has been useless for years, however, since they no longer make the old peel apart instant films. 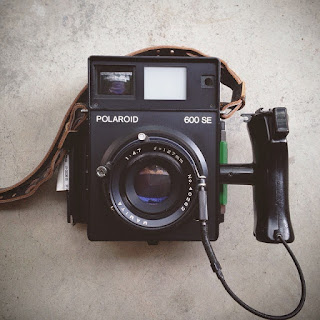 Recently, though, I found a fellow who makes a back that allows this camera to shoot 4x5 film.  With Covid and all, I haven't tried it yet.  Today will be the test.  I took this with me to the photo store yesterday, and the kids went wild.  I hope it works out.  If so, it will be "da bomb."  At least that is the dream.  But as I've confessed, I've lost my nerve.  I went out with two Rollieflex medium format cameras yesterday to finish off the rolls of film that have been sitting in them for god knows how long.  The end of my walk was through the local farmer's market.  Just carrying a camera made me a villain, it seemed.  I would smile at people as they passed, and they would look back at me like I had just raped their child.  I have been cursed with the Mark of Cain, it seems.

To wit: I know I should start working in drag.  It would make the world of difference.  It is just doing it the first time that is the hurdle.  First I have to go shopping.  I'm thinking one of those hideous print sack dresses that all the women my mother's age seem to wear, floral or just faux-Jackson Pollock print.  Some sneakers.  A baseball hat and a Covid mask.  I don't know.  Maybe it would work.

But first, a trial by fire.  I'll take the big fucker out today and shoot through about a dozen sheets of film, then take them back to the house to develop.  I have no faith, though.  Every 4x5 I've taken has had something wrong with it.  Usually it is my fault, but not always.  We shall see.

I've made a luncheon date with c.c. for the coming week.  I realized I haven't seen him since the whole Covid thing began.  Hayzoos Marimba, that's a long, long time.  We will eat on the banks of a large lake and have Goldfish sandwiches and watery drinks.  That, at least, is what he has promised.  But that is what hillbillies do.  He is going to harangue me about Twinsville.  I have not secured credentials, and now I'm not sure at all if I will go.  It may be a little soon to leave my mother alone anyway.  I always knew that, but I was preparing just in case.  If this 4x5 shit works out today, though, I may be hot as a rooster in the henhouse to go.