Buy the Ticket, Take the Ride 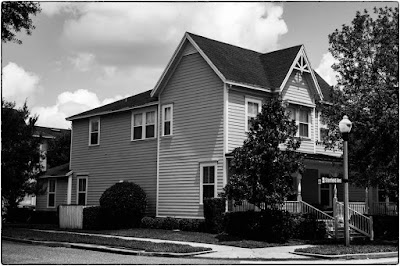 I'm still taking photos like this one.  It is from a walk I took from my mother's house through a neighborhood with big houses on small lots.  You won't find kids playing in the front yards here.  You know what happens to kids who go outside.  Most of them are snatched and never heard from again.  It's a shame, but now parents are forced to keep their children even after they tire of them.  But there is good news.  "Biden," as "they" say, is going to give parents money for every kid they have.  That's right!  If you have kids, whether you can afford them or not . . . .

"Biden" is also giving people who didn't want the rigors of a real college, people who opted for unaccredited mill factories (whether they actually "graduated" or not) their ill-spent money back.  Trillions of it.

So Fox livestreams Trump rallies.  I watched one with my mother a couple nights ago.  He actually said, "The Democrats. . . have you heard. . . all they talk about is race, race, race. . . ."

I was stunned.  But, you know. . . all those white hillbillies with six kids who enrolled at Trump U. and didn't complete, they are getting benefits.  And still, who do you think they are going to vote for?

I have gotten nothing, not a dime, from the U.S. government, and I pay more taxes than Trump.  If you are not retired, you may not know this, but the government taxes Social Security benefits.  Does that make sense?  How much money does it cost to give out dollars to retirees then pay people to get a portion of it back?  I would love to know that figure.  I've tried finding it, but I've had no luck.

I'm betting that China will buy Cuba.  Haiti. . . I don't know.  Not so much, not unless they are interested in the Dominican Republic, too.  But I don't think it is a long shot that they will replace the old Soviet interests in Cuba if for no other reason to show the U.S. what it is like to have a military presence just off your coast.  Taiwan, I mean.

The Cuban people have been looking for U.S. help for a long time.  It has never come.

The liberal media keeps pushing the Climate Hoax and the Virus Hoax.  They keep saying there was no election fraud, that Biden is a legitimate president.  When will it end?

Do yourself a little favor.  Don't turn on Fox News, not even to please your mother.  It is unbelievable that everyone associated with that network isn't locked up for. . . do we have a law against hateful lying?  Surely.  But they are clever.  Like Trump, they always pose a facetious question and then answer, "If that is true. . . ."  You know.  I've heard people say.

My mother thinks I'm a maniac for yelling at the television.  She believes me to be unhinged until she needs help dealing with insurance companies or wants me to do something for her online.  Then, you know, I'm a genius.

Once in awhile, I get to watch something on t.v. The other afternoon, I played a documentary called "Riding the Dog" made in 1989.  It is about riding Greyhound buses.  I did that for months when I travelled around the country after college in 1975.  What a ride.  And though the doc was made eleven years later, it has some of the flavor I remembered.  As I watched, I wanted to grab my camera and go again, just ride a Greyhound out west, stopping to eat the most hideous restaurants in the country.  I still remember conversations I had and people I met all those years ago.  I never did get around to finishing the novel I started writing about it when I got home.  It is a shame.  I've reread the first thirty pages, which is all I completed, and they weren't bad at all.