I Don't Want to be Old Anymore 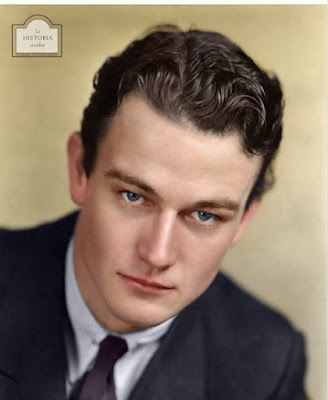 Jesus. . . I wish I had taken that photograph.  It was done with a large format camera and a great lens, I know.  The Duke was a handsome fellow in his youth, but that is the road to Hollywood, ain't it?

I am a miserable fuck, and I don't want to be old anymore.  I am seething with anger and something else.

Yesterday, I had a confrontation with a bicyclist.  At the stop light, he pulled up beside me and started in.  Said I had gotten too close to him.  I told him that it was the other way 'round, that he had changed lanes as I came by.  He said something stupid, and then I got heated.  I called him names.  He told me something, something, something. . . "Grandpa."  I told him, "Cocksucker, when I get out of the car, you are going to get the shit kicked out of you by Grandpa you little shitwad turd!"

What the hell is wrong with me?  My anger overwhelms all sense.

He declined the invitation.  We sat at the red light a long time.  I felt badly.  I pulled up and rolled down my window.

But he was done with me.  Fuck, I thought.  I wanted to get out and beat him.

Down the road, I felt very badly.

Later in the day.  When I took my mother to therapy, we got into the elevator.  She didn't push the button.  I stood there.  She stood there.  Nothing happened.  I watched her.  I wanted to know how long she would stand in a stationary elevator.  Turned out to be a long time.  After awhile, she said, "We're not going anywhere."  I asked her if she thought the elevator would automatically take to her destination floor.  She looked at me quizzically.  It took awhile.  I asked her if she had pushed the button.  She was very upset.

"Why do you have to treat me like that?"

I watched her during therapy.  I said nothing.  She is an old hillbilly woman.  Nothing to be done, but it makes me sad.

Her neighbor brought over some food she had made for my mother.  She sat down.  To talk.  And talk.  She likes to tell stories, but they have no point.  They are all about her.  I wasn't as nice as I have always been.

After therapy, I took my mother grocery shopping.  She wanted to go to Aldi's.  Have you been to Aldi's?  I am not good at Aldi's.  It is a store for morons always in some awkward part of town.  I'm not against poverty, but I have a problem with stupid.  Oh. . . I know.  The fruit and vegetables are good and cheap, but I wouldn't let my mother buy any of the meat.  I was irritated from the get-go.  We had to pay a quarter for the use of a cart.  We got it back, however, when we took it back.  WTF?

I was losing it at that point.

For dinner, I made a frozen pizza.  "Cheat night," I said.  I fried eggs to put on top.  When I served my mother, she said the egg wasn't cooked.  The yoke was runny.  She didn't eat runny yolks.

After dinner, I poured a scotch and put on a video about the Neue Gallerie.  She wan't interested.  I put it on the Medicare Channel and told her to watch Matt Dylan.  That is what she is doing now.

I am about to go mad.  I don't want to be old anymore.

At the gym, there were two beautiful, fit girls who I see there almost daily.  I don't look.  Never look.  Nothing can make you out to be a creep like looking.  But I can tell.  They keep me in the periphery of their vision.  How?  Well. . . maybe they are in mine.  The taller one, however, was looking at me directly. She smiled.  We spoke pleasantly.

For whatever reason, I thought of Sam Shepard.  Somehow, I thought, he would understand.

I get a copy of my book for perusal today.  Vanity Press.  But. . . I can send it out for rejection.  That is supposed to be some sort of valediction.  So they say.

Once it is in my hands, I will let you know.

I slept through the night without taking anything to help me sleep.  I should say I didn't get up, not even once.  I woke during the night several times, however, in flagrante delecto.  I was dreaming of women, some I know, some I don't.  It went on all night long.  Oh, how lovely life can be in dreams.  Obviously I won't go into details.  Other people's dreams, etc.  But I think it was the incident at the gym that did it.

I've decided to lose weight and regain my youth.  Ha!

I don't want to be old anymore.