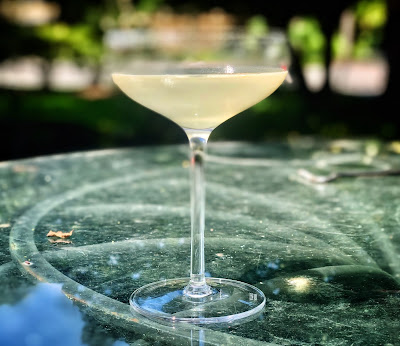 I've decided to become a professional iPhone cocktail photographer.  Working with the models is so easy and they are always so beautiful.  I made this at my own home yesterday after my shower and before returning to mother's.  It was impossible to drink it slowly.  It was difficult to resist not making another.

But I had to away, as they used to say.  My mother's needs were calling.  We are now doing two to three home therapies a day, and my assistance is necessary.  It is difficult for me because my mother trembles with pain.  I want to hand the job off to a professional, but of course there is not one around, so it is up to me to decide how much pain my mother can stand.  I'm afraid I decide on very little.

In taking off her sling, she somehow disassembled the webbing, and of course it was up to me to rethread it.  I couldn't do it.  I know how a buckle like this one works.  It needs friction against itself.  For half an hour I tried to fix it.  I tried every combination of up and over, down and up multiple times.  I tried to laugh.

"This is just ridiculous.  Stupid people can do this right away.  This is why I don't do well with working on the house.  Do you know why I didn't sail my sailboat around the world alone the way I had planned?  Because I knew I couldn't fix things on the boat.  When they asked, 'How'd he die?' the answer would have been 'Incompetence.'"

Then I tried for another half hour until, finally, I realized there was one more contact point I was missing on the buckle.  Voila!

I was sweaty and shaky and irritable.  "I'm going to go outside and have a cocktail and a little cheroot.  I'm done in."

But chores were not over.  I had to make dinner.  I had asked my mother in the morning what she would like, and she said she would pull out some ground beef patties to thaw.  I had stopped at the grocery store earlier to get broccoli and beans.

"Beef, beans, and broccoli," I said.  "An alliterative dinner.'

But when I looked at the patties she had pulled out, they were not beef.  I don't know what they were.  Micro thin patties of some kind made of fat and cartilage and of a light fleshy color, pink mixed with white.

Another trip to the grocers.

Dinner, I confess, was not so very tasty.  It was not good at all.

"Well," my mother said, "at least it's not many calories."

Etc.  We are entering our third week today.  Many more to go.