Laughing in the Face of Stupidity and Fear 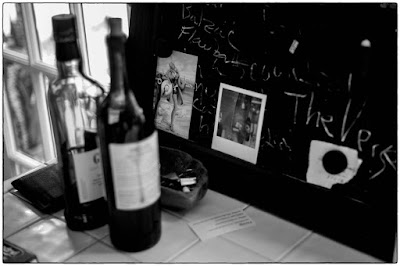 First thing, two stories that will tell you something/everything about me.

First, as I said yesterday, a stupid person could fix my mother's sling in seconds.  My mother's neighbor's daughter did just that.  In seconds.  What I had finally done after an hour was all wrong and completely idiotic.

Second.  My mother's 97 year old widowed neighbor has mice/rats/whatever in her garage and in her house.  The neighbors all look after the neighborhood elders, and one of the women called a pest company to come out and rid the widow's house of them. This morning, when I got up to get my coffee, there was a mouse in the windowsill.  Scared the shit out of me.  I didn't know what to do.  I watched it slide behind the curtain.  I could still see its tail.  I stood there for a long while thinking.  What could I do?  I looked around for something to catch him in.  I could find nothing.  Should I try to smash him, I wondered?

I woke my mother who was sleeping in the recliner.  She told me to get the mouse.  She handed me a towel.  WTF? I said.  You get it.  No, no, you can't.  I tried to open the curtain, but the little fucker moved and I jumped back and screamed like a. .  . what am I allowed to compare that to any more?  Well, like a little girl from the Bad Old Days.  Yes, like a gay femme.  Like someone with a syndrome.  Like whatever.  I was screaming and jumping worse than I would have imagined.  But I guess I scared him.  He ran behind the refrigerator.  Good, I thought.  Fuck this.

I'll get rat traps, tapes, and poison today.  Electronic zappers.  Whatever it takes.  Why the fuck don't they have ray guns for this kind of crap?

No kidding, though, you should have seen me jump and dance.  I didn't know I could reach those high notes.  What a tonal range I just developed.  I think my mother should be grateful, though.  I might have pushed her in front of me toward the little beast if she had been near.

Fucking rodentia.  What do you think YOU would have done?

I'll see his beady red eyes staring at me in my sleep tonight.  The only good rodent is a dead rodent.

Yes, yes, it is true.  I DO have a degree in zoology.  But I have also already confessed I was the only one in my vertebrate zoology course who never captured anything on our weekly outings into the wilderness.  Couldn't even pick up a lizard.  I was the Felix Unger of the class.

Oh what my mother must think of me now.

One piece of news made me happy today.  Gregory O'Connor lost his big MMA bout last night.  I know, I know--McGregor. . . no. . . Conor McGregor.  I am not sure.  But he is the sort of thing that is wrong with the world right now.  The entire UFC should be banned, not because the fighting is brutal, but because of the values they extol.  They let shitheads act out to gin up money for fights.  It is wrong.  The last time I was this happy about a fight was when Ronda Rousey had her jaw broken and her eyes cut up.  Sure, I'm a horrible human being, but not as bad as they are.

Still, we all know how it works.  Arguments between smart guys and rough guys, I mean.  We know how those go.  You can make someone feel stupid right up until he breaks your nose.  And he will.  And you know it, so at some point you take your ball and go home.  Only he keeps your ball, and you say you are going to report him to the proper authorities.  But nothing happens except you lose your ball and have a broken nose.  And suddenly, knowing all sorts of stuff about Euclid doesn't seem as important.  Nor do important dates in history.  Nor great quotes from the world of literature.  And none of your smart friends seem likely to help you get your ball back.  That is how arguments go.

Having grown up with evil, brutal, sicko criminals, I have always known that.  It is why I didn't just read books.  It is why I learned to box, went to gyms, got good at sports.  A badass intellectual.

Did I tell you about the mouse?

Did I tell you about my mother's sling?

Yup.  In the end, I'm just a cowardly idiot.

But that Gregor O'Connelly sure got his last night.  Got his ass whupped.

This morning, though, I have to of wonder what either of those fighters would do if faced with the mouse.  I can't even Google that one.