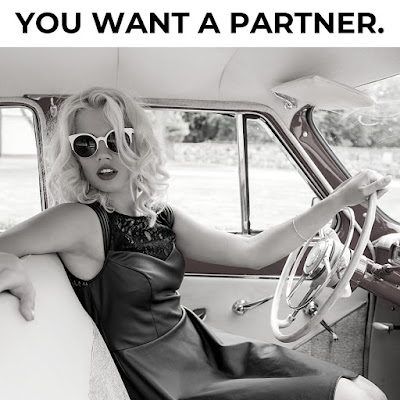 It's not interrogative, it's declarative, you see?  Not a question.  I keep getting ads like this on my computer.  How did they know?  If only they told me that this person was a doctor or a lawyer?  I'm not saying I don't get excited by overblown looks.  I used to tell my friends that a woman could never have lips too red, breasts too large, or heels too high, but I was absolutely kidding.  I'm not a breast man.  Indeed, I love looking at a photo like this.  I mean, who wouldn't.  That's a really cool car, an early '60s something, I'd guess.  But you know how those old cars drive.  And if the driver doesn't have the most interesting things to say, you'll be the man in the old joke.  You know the one?

You can change the genders in that joke, I guess.  Maybe it doesn't matter though. We are still in the era of saying that men are dogs, right?

My buddy Brando always said, "Stick with the sixes."  It was clever, but like all advice, it did no good.  As Glinda the Good Witch responds to Dorothy's query, "Why didn't you just tell me in the first place?"

"It would have done you no good.  You had to learn it for yourself." (link)

And so I have.  More than once.  You think, maybe, the first time is an anomaly.  But then you find out that it is simply science.  Genetics, to be more succinct.  You see, the genes for tremendous beauty and that other thing are too close together on the chromosome.  They just don't get separated in reproduction.

Again, choose either gender as you like.  Just ask Brangelina.

I don't disparage great beauty, however.  Indeed, I'm as attracted and repulsed and manipulated by it as anyone.  Beauty is as great (or maybe even greater) a power as intelligence.

It just doesn't last as long.  And once you have experienced the tremendous potency that great beauty brings, losing it can be the most terrible thing.  It is like becoming an athlete beyond their prime.

Being a person of great interest, however. . . that's another thing.  My first request after meeting the girl in that photo would certainly be, "Tell me a story."  Oh, yes, it would be.  Don't suspect me of lying.  And if no story of interest was forthcoming?  You'll call me a liar, but my interest would immediately wane.

But Brando. . . that doesn't mean a six has a great story to tell, either.

It is the good story that gets me into trouble.  It surely has, too, because a great story teller is always a little bit crazy, right?  It's just science.  Genetics to be more succinct.  You see, the genes are just too close to one another on the chromosome. . . .