No Time to Make New Enemies 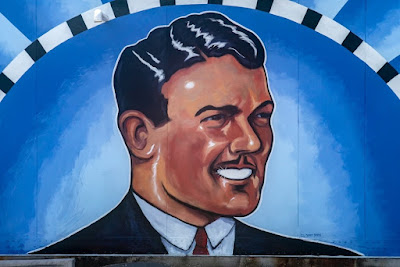 It is a thousand degrees.  A hurricane threatens the coast.  And yet, in the midst of summer, a team from Florida wins the Stanley Cup.  That's the world in which I live.  It is off.  It is wrong.  Still, all the kids in Tampa should strap on their skates and get outside to play a little hockey.  Just like they did in the Bad Old Days.

Yea, yea, yea. . . I'm hung up on the idea that the old days were bad.  But here's the thing.  THE thing.  And I learned it from one of my closest friends.  She grew up a Negro in a southern cracker town.  And I mean. . . it was CRACKERVILLE.  Foghorn Leghorn types were in charge of everything from money to aesthetics.  The place was a Faulkner novel.  Nestled alongside the last navigable body of water on the only river to run backwards in the U.S., it was once a wealthy town.  The river was the highway running to the ocean, and the vast resources of the central part of this developing state were shipped from Crackerville.  It was the place where all rail lines ended.

With the advent of automobiles and highways, however, shipping turned to trucking, and Crackerville was dethroned as the powerful shipping kingdom it had always been.  The opera house became a movie theater and the historic naval base began to disappear piece by piece.  The old influential families, faced with the inevitable loss of money and power. . . well. . . you've read your Faulkner.  If not, you need to.

My friend grew up there in the fifties and the sixties when it was racially divided and very segregated.  Blacks lived in a certain part of town.  Outside those designated blocks, a person of color could not be sure what would happen.  Or maybe they could.  But change was coming, and her parents, one a high school principal and the other an elementary school teacher, decided that she would be one of the first Black students to integrate a White high school.  Maybe you can imagine.  Maybe you can't.  But I went to a cracker high that was integrated by a few Black kids, and I can tell you that every horror story she would tell you would be true.  And even though I was there, hearing the tales from her makes my skin crawl.

But that is all preamble and not the point.  After high school, I went to the most liberal state university in the south.  It was a hippie haven, and I learned much about would-be liberals.  As my college roommate always says, "Liberals lie."  It took me awhile to figure out what he meant, but the lie they tell is to themselves, and that is the worst kind.

"Oh, dear, you life must have been dreadful then," they might say to my friend.  You know. . . back in the Bad Old Days.

And she would burn.

You can't do that, you see.  You are not allowed to invalidate a person's life with your threadbare, worn out sympathies.

For, in truth, she had a wonderful life full of marvelous people and good food and happy, happy memories.  Was there badness?  Yes, it was plentiful.  It colored her perception and made her who she is.  But don't--DO NOT--tell her she wasn't happy.  DO NOT invalidate her life.  Because you weren't there.  And you cannot know.

This is a thing she taught me.  One of the many great things.

My mother and I often talk about the past, her life.  I asked her if she would go back thinking she missed a simpler life, a bucolic time.

"Lord no," she said emphatically.  "I wasn't even allowed to get my own credit card."

Old Dental Dan up there at the top of the page sure represents something, doesn't he.  It is difficult to believe that a dentist would advertise his practice with such a sign.  The Bad Old Days.  And yet. . . .

Now, as we approach perfection, everyone can be happy, of course.  These are the Best of Times.  I'm no Voltaire, but the new God is in his heaven, etc.

Still, it is reported that on his deathbed, Voltaire was asked if he wouldn't now, before he passed, at last renounce Satan, to which he apocryphally replied, "This is no time to make new enemies."