A Day Pass and the Moon Unseen 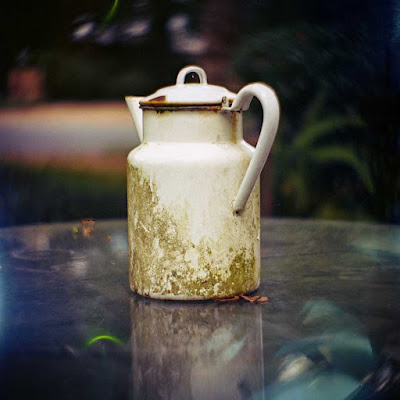 Have I ever shown you this one before?  No, no. . . this one is NEW!  I just made it.  Cool, eh?  You see the difference?  No?  C'mon.  I took this one with a Petzvar lens on my Hasselblad.  See how the background blurs with a swirl?  That is the special characteristic of this lens.  It was designed after an old Petzval lens by a guy in Russia.  My buddy from the photo store gave it to me to try out.

"I don't have anybody to shoot, so I'll just try it out on things around the house," I said, hoping he wasn't looking to see some masterpiece.

And I developed it, too, right in my kitchen.  Fucking belongs in the Met or at MoMA or someplace.

Sorry.  This is the only kind of crap I have right now.  Have I told you anything about my life recently?

Well. . . I changed it a little bit yesterday.  In an effort to begin living my own sad life again rather than the one I live at mother's, I left early in the morn and didn't come home until just before dark.  A real rebel with a cause, I am.  At first, it was much the same.  I took a long walk that brought me down the Boulevard just around noon.  When I got back to my house, I was sweaty through and through, and so before I showered, I researched some things on the internet and then ordered some chemicals from a photography company so that I can mix up a special glass plate developer in a few days.  Then, after showering, I was flummoxed.  I don't know how to do anything on a Saturday afternoon any more, but I knew it was time to do something.  I wanted to go to a hip little cafe somewhere in France where I could write and people watch and feel full and complete.  But I wasn't in France and there are no hip little cafes in my own hometown, and so, feeling defeated, I drove to the Cafe Strange to get a mimosa.  I hadn't been there in a year and a half or more, but it seemed like something I had done just yesterday.  It is a place where one can sit and write and watch the crowd even if the tables are dirty and the crowd is weird and the food nothing I would eat.  But the mimosa is a deal, six bucks for champagne and freshly squeezed orange juice in a big stemless wine glass.  There is nowhere in town that can beat that.

But the counter keep was surly and told me to wait while she counted out her drawer.  She is a big girl, but she had put on another twenty pounds or so like many of us 😞 and she can be quite frightful, so I smiled and sat patiently waiting.  Meanwhile, people lined up to get their treats.  When she brought my drink over to where I sat so sublimely, she said to pay the other girl.  She was off.

O.K. I took my drink outside away from potential Covid carriers and sat where I could choke on a doubtful looking character's cigarette smoke.  It was hot and humid, and the air was full of someone pontificating about sleep and the body's circadian rhythms to what I could only be an enraptured group at a table behind a big ficus shrub that hid them from my view.  Across the sidewalk, a woman who looked vaguely familiar sat smoking a cigarette, drinking what looked to be an iced tea, and working a crossword puzzle.

My phone pinged.  It was a text from my travel/art buddy.  He had gotten his Covid booster shot, he said.  I wondered why as we are not really due for one until October.  He was leaving for Spain in three weeks, he said.  He is going to walk the Camino trail.  He has been preparing for this for years, but Covid kept him from going.  Now that he's all vaxed up, he raring to go.

To which he gave his usual response.  He tells me to quit being a pussy and just go.  Sure, I say. . . I'll just kick ma to the curb.

I got up and took a phone picture of this. 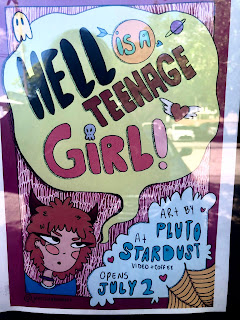 I decided to send it to a friend of mine, an old colleague with a Ph.D. in mathematics who teaches at a renowned Liberal Arts College and who has three teenaged daughters.  She is a spectacular woman and I've known her children since birth.  Now, of course, I want to make pictures of them.  It terrifies me when she says yes, however, for I'm afraid how that will go.  She texted back and we had a brief online conversation that ended with her feeling for me and my situation of caring for my mother.  She is caring for her father who is in a home, and she said she understands completely, that she has lost herself in all the caring and was hard pressed to say where she was in all of it.

I didn't write back that she had a family and a job and a variety of experiences I am not able to have.  As much as she loves me, and as close as her compassion comes. . . .

Unless you are a Japanese soldier isolated on an island in the Pacific. . . .

I decided to send the picture to a lesbian who worked in my department.  I love her.  She is much like me in her love of women and life, and she doesn't mind men.  She lives balls to the wall, so to speak.  She wrote back a funny text saying she hated teenage girls and didn't really like them until they hit twenty-two.  Heaven or Hell, I said.  We'd have to ask Gaetz.

I wrote away for awhile realizing I hadn't written a thousand words with a pen in the past two years.  My handwriting was worse than ever.  I flipped back to the first pages of the journal I had brought with me.  In that first entry, Ili and I were sitting there planning our trip to California.  Apparently we were arguing.  Rather, as was her practice, she was.  I was suffering it, trying to deflect and endure.  According to what I had written, she was not happy about not being married.  I remembered the day.  We had just eaten ceviche and drank beers at another little hipster place just down the street.  That had been nice.  But as can happen, things went south in a heartbeat.  Sitting there in the sticky heat, it was easy to remember such things.

I called my mother.  I had mentioned grilling steaks for dinner that night, but my mother was unsure.  She feels I overfeed her.  I had an idea.

"Hey, mom. . . what do you think about those steaks tonight?  If you don't want them, I can do something else."

"Weeellll. . . I could just get sushi and you could have whatever you wanted."

"Sure, that would be fine."

"I think I'll eat it at my house and watch some videos about some art techniques that you wouldn't have any interest in then."

I went to the counter and paid for my mimosa, then headed across the street to the liquor store to get some supplies, sake, Campari, and of course, worm killer which I was out of at my home.  I was flying high.

At home, I waited until the appropriate time, then over-ordered without worry.  Tonight would be a feast.

I thought to take a picture of my proud meal and send it around like I used to, but I was too hungry.  My god. . . I can't tell you.  I simply can't.

When I could eat no more, with food still sitting on the tray, I poured a big scotch and sat back to watch t.v. on my big, overstuffed leather couch.  The day was drawing down.  I was comfortable as I could be.  What would I watch later, I wondered?  Oh, man. . . .

Then I realized it was getting late.  I had to get moving.  A quick cleanup, a go cup, and I was on my way back to my mother's where we sat in the open garage in our usual chairs watching the day's last light.  I lit a cheroot and freshened my drink.

My mother asked me a question.

"Is that just a habit or is it something you have to do?"

She was speaking of the cheroots.  It had been a pleasant afternoon.  Now it was time to explain myself.  Later, we would watch television and go to bed.

The night sky would house a full moon I wouldn't see.