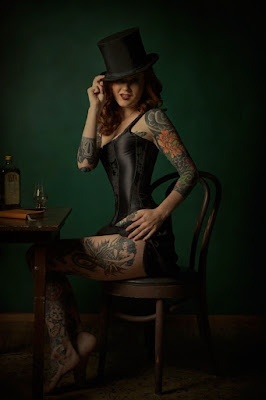 Old photo newly processed.  I take photos some days.  They are all "test shots."  I process film on others.  I tell myself I must get out and make "real" pictures.  But I am routinized, and by the time I am ready to go, it is a hundred degrees with humidity you can't believe.  Some days, needing to do something, I will pull up old files and try new things.  Other days, I try to see if I still remember how to do the old things.  I've had trouble getting the old results.  That isn't bad.  One doesn't want to do the same thing eternally.  And I like some of the new processing I do.  But it was quite a relief to finally recapture the old look.  Remembering allows me to move on.

Just as relieving myself finally from the factory does.  But there is a similarity, really, between "moving on" in both cases.  What will I photograph?  Who will I meet?

I've taken enough photos of buildings and objects, or so it feels.  Every photographer has been out making pictures of buildings and sky, old signs and motels, odd objects like the biggest ball of wax, etc.  And, of course, they've all simulated Kodak Portra 400 pastels.  Fujifilm formulas have done that digitally.  And so blues become robin's egg, reds become salmon, oranges have a dash of pink, everything in high tones with washed out shadows.  I can do it, too.  I've done it.  I may do it again.  Just because everyone masturbates doesn't mean I shouldn't.

But I need to find the "next thing."

That is what seems to haunt me as I roll around in my semi-sleep at night, think-dreaming my way through the next hour or two.  It has become a real struggle.  The bedsheets and the pillow cases give evidence of the tale.  I am normally a static sleeper it would seem, as when I wake mornings, my sheets and pillows are virtually intact.  I only need pull the covers up and the bed is made.  Long ago, I learned to twirl rather than flail.  I read that when sleeping out, snakes like to curl up alongside you for warmth and that flailing could have disastrous results.  It is a good thing, then, that I have not been sleeping out recently.  Two nights ago, I had to get up in the middle of the night to remake the bed.  Somehow, I had twisted so that the sheets were on top of the blanket, completely reversed.  I'd knocked over a lamp with a thrown pillow.

Even when I take a sleep aid now, my sleep is intermittent.  I read today that depression disrupts sleep.  Well.  That may be.

So last night, I was thinking about what photo projects I might start.  I was having a terrible time.  I've grown to fear people more than I had before as they have, in the main, become more fearsome and aggressive.  Almost all human interaction now carries the seeds of danger, especially if it involves a male and a female (if I may be so reductive).  Consent no longer carries any weight.  Everything seems to be coercion.  We are living in a psychological Deadwood now where every perceived slight needs terrible retribution.  If art isn't abuse, it is appropriation.  All art is sin, of course, if it has any value at all, for those who believe in the concept of sin, at least.  Minimally, it is an affront.  And truly, those are the only kinds of pictures I desire.

That is not true, of course.  I love many decorative things.  Indeed, the art on my walls are mostly that.  There is nothing wrong with lovely things.  They bring me peace.

But they can't arrest me like a Modigliani or a Balthus or much of the collection shown at the Neue Gallerie in New York.

And so the struggle between the poles.

I thought last night, too, that I need to make new friends.  My closest friends over the years have moved to other places, and though we stay in touch, the immediacy is gone.  And now that I have left the factory, those relationships begin to fade as well.  Where does one make friends in life, I questioned in my thinking sleep?  As children, we make them in our neighborhood, then in school.  Later, we make college friends, then we meet people at work.  Some people make friends at church, and others in specialized groups.  I made many of my friends through adventure travel interests.  It turns out, our friends are specialized, recruited through the groups and places we hold closest.  Isolated for more than a year and a half now, there is really only one place I return to on a regular basis.  The gym.

I have never really interacted with the people in my YMCA.  It is a social club for a certain type in too many ways, people who share values not my own.  I avoid looking at them as much as possible and rarely speak a word while I am there.  They talk, though, incessantly.  Schools, little league, restaurants, tennis clubs, resorts, new cars, new boats, yada, yada, yada, all in those made for FaceBook orthodontic smiles, all in commercial t.v. tones.  It makes me grimace, and I think it shows.  I have worked out in prison gyms for most of my life, and I think I still carry that scent.  I don't look like them, and when I catch them looking at me, it is with a certain amount of derision.  I imagine they think I am a welfare case, someone given a "scholarship," a free membership or one at a price reduction.  The people who run the place are chatty with the other members.  They never talk to me.

Recently, however, something has changed.  It started with the older members.  Thee is one woman I have "known" for years.  I put that in quotation marks because I haven't really known her, but we have been in some of the same places for more than twenty years.  We used to go to the same yoga classes long ago.  Recently, we've been speaking to one another, and over the weeks and months, as can happen, the conversations have become longer and more familiar.  We are now at the point where we ask one another questions about our lives.  One day, an older fellow came into the room where we were stretching and talking and he briefly joined the conversation.  Somehow he snuck in that he found the woman to be very attractive.  Indeed, for a woman of her (my) age, she is.  I imagine all the old fellows find her so.  In the following days, he managed to become involved in our conversations more, and now when I see him, he wants to stop and talk.

One day, another old fellow overheard our conversation and made a witty comment.  I'm truly a friendly guy, and now, he, too, likes to talk.

And then another fellow.  And another.  Perhaps, I tell myself, I have become accustomed to entertaining my mother's crowd and now it is my fate.

Until yesterday.  A pretty woman from across the room was looking in my direction and smiling.  I know better than to smile back as there could be someone she knows behind me or she may simply be trying to relieve herself of gas. . . I don't know. . . but I am not foolish enough to believe she wants to have my baby.  She, however, moseyed over to where I was standing and said, "I think we might know one another."

It turns out she was in a class I taught many years ago, and eventually, I remembered her.  She was quite taken with me then, I am convinced, which was unfortunate as I was a newlywed.  If old photos are to be believed, I think I was quite dashing at the time, and I could only wonder what she must think of me now.  But she stayed and talked and told me of her life, eyes glistening, emitting a wonderful joy, and slowly, I was beginning to wonder. . . .  Then, one of the old guys I had just met the day before interrupted to say hello and to tell me of his going ons.  I smiled and responded, and that was it. . . he wasn't going away.  And so, in the awkwardness of the moment, the woman excused herself and said she'd leave us to our conversation.

Five minutes later, after informing me that he was leaving town for the weekend, the fellow said he'd see me next week.

These, I realized, are my new friends.

Meanwhile, I'm tearing up the sheets.

I have just entered the ninth week of living with my mother.  Even my old routines are gone.

I feel that maybe I am gone as well.