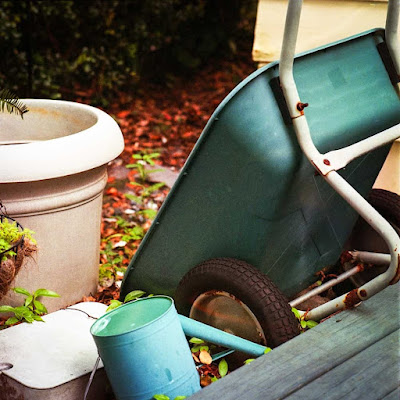 Shut up.  It's all I have.  Another test shot.  I think this one was with the Hasselblad and a lens diopter.  And I developed the color negative myself.  I didn't do anything to alter the colors.  They are a little odd, but I like them.  They are accurate but for the browns which seem to have a lot of red in them.  Selavy.

But maybe there will be something more coming in the next few days.  I got out yesterday, out of town, out of the county, out into the world.  I'd gone to the gym earlier than usual, so after I had cleaned up and eaten, there was still a long day ahead.  It was overcast which was something I needed to use the big old Liberator camera, so. . . BBC. . . I loaded up the car with a bunch of film and cameras and headed to Grit City.

I haven't been to Grit City since my girlfriend and I split up, over a year and a half now.  The way there is the same way to the Factory, and driving that road brought on its own emotions.  But putting the miles between me and the house was liberating.  On, past where I would turn if I were going to work, the roadside becoming older and more worn, old buildings barely maintained, defunct shopping centers with Dollar Stores and nail salons, sandy berms with random weeds, cheap liquor stores with bars on the windows, bars with dirt lots, used tire stores and laundromats. . . that is the way to Grit City.

Driving into town, I passed a dilapidated building that held a defunct laundromat connected to what I took to be a church, though the only telltale was a big cross attached to the road-facing facade.  I put on the brakes and turned around.  It was important.  Not the building, the stopping.  You can't be a photographer if you don't take pictures, and most of the pictures you make are not going to be winners.  So it was the stopping that was important, the stopping and the doing.

I parked the car in the cracked and pitted black tar lot where weeds were sprouting.  I took out my phone to make a light reading and decide my camera settings.  Walking back to the car, I looked across the street where a shirtless man sat on a plastic chair under the long, shallow awning that ran the length of what had once been a motel but now was something else, a place you landed when everything in your life went wrong.  He kept his eye on me as I took the big Liberator from the car.  Using that camera is anything but quick.  After I had made an exposure, I flipped the big 4x5 film holder around and walked over to get a picture of the anonymous house of worship or rescue mission or whatever it was.  When that was done, I put the camera back into the car and grabbed my converted Polaroid camera to make two more 4x5 exposures.  The shirtless man just stared.  When I was finished and back in the car, the fucker wouldn't start.  I've been having trouble since I took it into the shop just before I moved in with my mother.  Now. . . well it seemed more of a bother.  I looked across the street.  I tried the starter again.  Rrr, rrr, rrr, rrr.  I sat for another moment.  Third time was a charm.

Next, I stopped at an old Dairy Queen from the '50s, but this time, I decided to leave the engine running.  Same routine.

And so the afternoon went, me driving and stopping and getting out into the sticky heat of the overcast day, metering, framing, people staring at me and my odd looking camera as I emulated some early 20th century shutterbug.  And with each stop, the nervousness was leaving me.  I grew more confident, if not more cowboy.  Cowboy?  Yup.  I had decided that I would assume a cowboy's countenance if addressed.  Cowboys are some of the most formal, polite people I have ever met.  "Yes sir," and "no mam."  That would be me.

Grit City is in many ways a beautiful place full of early 20th century two story houses with wrap around balconies and gated yards, brick streets, and a wonderful old downtown.  It was once the richest town in the state as it nestles the banks of a major river that runs north to the sea, but once trucking supplanted shipping, fortunes faded.  Now, however, much of the historic old town has been rejuvenated.  Still, there is some pall that hangs over things, some stain or stink of idiocy and corruption like a Faulkner novel.  It may be a stain or some curse from the past.  I don't know, but for all its beauty, it lacks charm.  It is not a place I would want to live.

One of the last stops of the day was in the parking lot of a redneck/cracker bar on the edge of the highway.  The sign atop a pole above the building might be from the '40s.  "George's."  Once I pulled the camera out of the car and stepped around to the front of the bar near the entrance, a woman walked out from the darkness into the light.  I guess I was a surprise.  She looked to be a rough gal of about fifty, though sometimes with real drunks it is hard to tell.  As I say, I guess I startled her, and her bleary gaze was none too welcoming.  She stopped and stared for a heartbeat.

"Hey!  You alright?" she challenged.

Here was my chance.

"I'm doing fine," she said, back arched, shoulders drawn.  I smiled and looked down into the viewfinder, pulled the dark slide on the film holder, snapped the picture, and turned toward the car just in time to see her climb into a pickup with a Trump sticker on it.  "Yes mam," I thought.  "Yes mam."

I got back to the house in time to mix up some developer and fixer and run a batch of four 4x5 negatives through the process before I needed to get back to my mother's.  I was nervous as I had been pretty much guessing at exposures all day.  That goddamned camera's large aperture and slow-ish shutter speed makes it impossible to shoot film without a dark filter in daylight.  I'm still trying to work everything out.

Twenty minutes later, I pulled the negatives out of the tank.  The first two were so thin, I thought they were blank.  Completely underexposed.  The third negative was the same.  The fourth, however, was just about perfect.  Then I remembered.  That was the one I forgot to put the dark filter on.  I thought I had ruined that one, but it was the only one correctly exposed.  One out of four, and that one a mistake.  That's o.k., I thought.  Those buildings are still all there, and now I have a better idea.  I wasn't all that disappointed.  It had been quite good to get out, to use that stupid camera, to do something to stimulate the senses.  No, I wasn't truly disappointed.  Something had been accomplished and I was happy.

There are many more negatives to develop today.  I imagine they are all going to be terribly underexposed, but I might get lucky.  First, however, I have to take my mother to therapy.  I won't have a chance to make any exposures today, but I will develop film and scan the ones from yesterday.

Yesterday was good.  It was almost fun.  Next time, I'll make sure I go hungry and stop somewhere for a sandwich and a beer.  Baby steps.