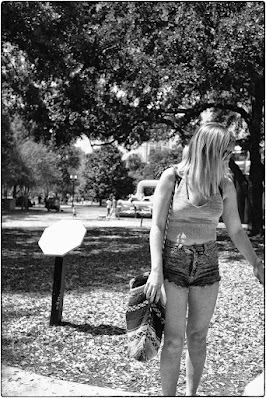 My mother gets up in the morning and shuffles around the house, through the room where I sit, over and over again, back and forth, sighing, moaning, head down, all the world a misery.  I ask if she's o.k.  She begins her desultory litany of things.  Then the banging begins.  Noise is better than silence.  How else do you know you're alive?  My nerves catch fire.  I become twitchy.  Sooner or later, I will begin to snap.  All I want is that silent peace.  The t.v. comes on.  News, weather, commercials, then the Medicare Channel.  I go in for a second cup of coffee.  She is not there.  She has gone to sit outside.  I turn off the television.

The beginning of the 6th week.

My back and hips are hurting.  I shuffle when I walk. . . sigh and moan.  I watch stupid things on YouTube.  I sit outside with the feral cat and stare.

When I was young and living with my parents before they divorced, life was much the same.  Only the shuffling and moaning have been added.  But there was the banging of pots and pans or the running of the vacuum and the constant drone of the television.

I began smoking cigarettes when I was young.  My friends did.  By the time we were in high school, those of us who made it and those of us who didn't, some of my friends smoked in front of their parents.  My best friend, Tommy, lived with his mother and stepfather in a 10x60 foot trailer.  Two bedrooms, one bath, two adults and three kids.  No air conditioning.  We could smoke all we wanted to there.  Tommy and I went to movies.  We wanted a different life, the life we saw there.  We desired all the "sophistication" that we lacked.  Foreign cars, yachts, casinos and chateaus on Mediterranean coasts--expensive things.  All we could afford were foreign cigarettes.  We began smoking Balkan Sobrainies. 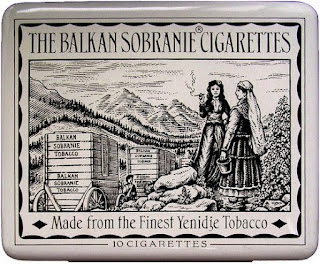 The tobacco was of an "Oriental" variety, produced in Syria and air dried in Turkey after which it was cured in smokey huts using fragrant wood and camel dung.  Or so I remember.  The aroma and taste was far different from the Virginia tobacco of American cigarettes, much deeper and more complex.  It transported us to another world.

We were desperate to escape.  It was with Tommy that I got a union construction job the summer I graduated high school (something Tommy never did).   Tommy got his girlfriend pregnant that summer.  He never escaped.

I quit smoking and went to the university, two of the better choices I made in life.

I don't remember what made me think of that tobacco yesterday.  I was driving and asked Siri to make a note so that I would not forget.

Perhaps it was the desire to escape that did it.