Pt I. Leaving the Factory 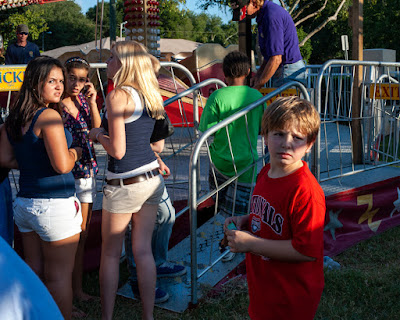 For awhile, I've been trying to mute the colors in photographs, trying to do what I see others doing in making the colors more pastel, but when I look back at my own color photos from the past, I don't mind the brighter colors at all, especially for street things.  They make the scene look "truer" and allows me to see what is taking place rather than being fascinated by the technique.  Sometimes, too, when I look back at the black and white photos I've taken, I get a hollow emptiness in the pit of my stomach.  I don't know what it is, yet, or why, but I've many newish photos that I can't bring myself to post here.  I need to figure that out, but it is probably why I became so enamored of colorizing.

Having said all of that, I have been shooting nothing but film for awhile now and have begun to underexpose my Portra 400 to see if I get those pastel colors.  The crazy thing is, I can do it digitally and I do really like some of the digital colors from certain cameras.

If I could only get people in the street to dress for color photography, things would be great.

I am finally done with the factory, I think.  It is like most things.  It takes time.  The kids all went out for drinks after work yesterday.  That is what I heard, anyway.  I wasn't invited.  Of course.  They wanted to talk about the events of the past few days and of what lay ahead in the coming year.  I have no part in that.

Moving on from a place that gave you meaning (and despite how much I tried to deny it over the many years, it did) is as difficult as moving on from a broken relationship.  Trying to do both in total isolation is its own monumental challenge.

Part I is accomplished, I think, though I've left a few guts on the floor there.

So then, what's next?  It is either lie down and die or push myself into trying something new.  It is easy to imagine the something new sitting on the couch, but actually getting up takes a lot of effort, and of course there is the great possibility of abject failure.  Or worse.  Worse?  Sure. . . a small but adequate measure of success.

"Oh, for awhile I think he was writing stories and taking photographs for the 'Dime and Penny.'"

"You've seen it, I'm sure.  They are usually distributed for free at places like laundromats and. . . well. . . you've probably seen them."

Do you ever talk to kids about what they read?  Thinking about writing for an audience now is like practicing horseshoes thinking it will one day be an Olympic sport.  Why, by gosh. . . it could happen!

I think I still need to accomplish Part II of moving on before I am committed to anything.  And, of course, I'll need to somehow accomplish extraction from my mother's house.  Soon her dependence upon me will be mostly emotional and hardly physical, though she is going to be ninety and is biologically more challenged.  Maybe I'll never get away.  Maybe I've become afraid of the "out there."  There is a name for such a condition.  There are many names for it.

I calculated yesterday that my Xterra costs me fifty cents a mile in gas now.  I have an eighteen gallon tank and it cost $51.00 to fill it last night.  O.K.  I just used the calculator.  It is more like thirty-five cents. Still, it makes traveling pretty f'ing expensive.  I have plenty of excuses for living a sequestered life.

But Pt. I is done, and I know that I need to make "new friends" as Brando used to say.  I just need to find the New Friend River.