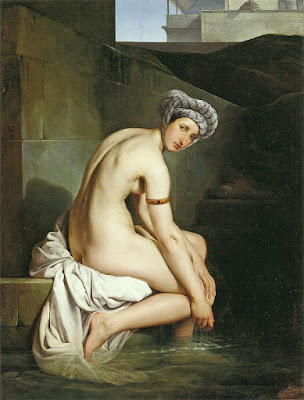 An American Hypocrisy becomes clearer every day.  I thought to write about it, but I can't.  I could, but I'm not informed enough to be anything more than ridiculous.  Still, I have two questions.  One--what is the American stance on freedom of religion?  The Koran, according to the Taliban (and others) place certain strictures on female behavior.  By following the Word of God, as believed by many Islamists, women are not allowed to behave as men.

But wait?  Isn't the same true of Christianity?  Honor and Obey and all of that?  As a matter of fact, aren't all the Abrahamic religions that evolved out of that little patch of desert in the Middle East conclusive on this?

Well, that is the first question about which I am under-informed.  But I was raised a Mormon, sort of, and I know the government did quell their bigamist desires.  But it confuses me, really, when Christians are allowed to ban abortion.  And there are still places where I can't buy liquor on Sundays.

It seems to me the separation of Church and State in this country is a very mixed bag.

I was taught Bible stories when I was a child and later on in grad school when I degreed in literature.  Lilith, for instance, the first first woman, was exiled for being too upity.  Then Eve got us kicked out of the Garden.  Lot's daughters and wife were dirty girls.  But God often forgave fallen women like Mary Magdalene and Bathsheba.

I'm no Biblical scholar, though, and I know even less about the Koran and the Talmudic teachings.  I've read the Bhagavad Gita and it seems women were treated a bit better there.  A quick Wiki search tells me that women are more venerated in Hinduism than in other religions.

But I've gone on too long about what I know little of.  My point is that the Taliban follow a form of religious law.  "We" are against it.  I'm just not certain how "we" pick and choose.

Don't misunderstand me.  I'm 100% against the Taliban and their form of religious belief.  I'm just not for the rest of them, either.  People and their particular moralities all confuse me at one time or another.

What was my second question?  Oh, Christ, I can't remember.  I took a pill to sleep last night and am still very groggy.

Oh, yes. . . my second question--something about the Jan. 6 insurrection vs. the takeover by the Taliban.  But I haven't the energy for it now.  Boy oh boy, though, I had some great unformed thoughts on THAT yesterday.

Whatever.  Our collective thoughts on religious freedom and insurrections are a mess.  Americans live with more public corruption than most European countries and on a par with the worst dictatorships.  Big Money decides everything, and that includes Big Religion.  The lowering of the American Intellect is a constant.  We sell slogans like "The Buck Stops Here."  Isn't a buck a dollar?  What the fuck does that even mean?

O.K.  I'm still having an acid trip apparently.  I have to go before I start spouting dictums like we should send Wonder Woman to save the Afghans.  You know where that will get me.