The Way of Q 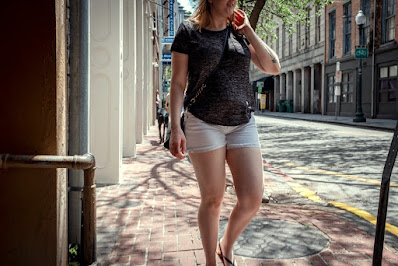 I received a lot of messages about yesterday's "mistake," the double exposure.  People really liked it.  As I said, it is probably two of the best pictures I've ever taken.  In truth, though, for all the trouble of the big camera and despite all the errors I make using it, I cannot make the decision to return to my usual cameras.  Their images look flat by comparison. 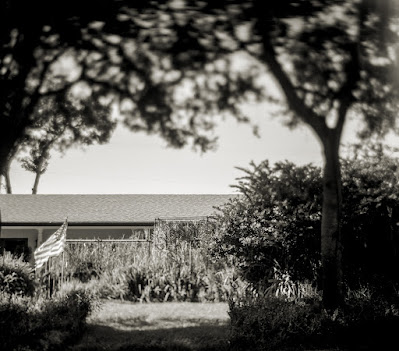 I post this only for illustration purposes.  It is practically 3D.  But as I say, the camera is a real bear to use.

But the double exposure is interesting for another reason, I realize.  You can't do that with a digital camera.  You can combine photos with an editing tool, but you can't make a digital double exposure, so that is part of the gone world, so to speak.  It's value has to do with its rarity.

I can promise you this--I'll make more mistakes without really trying.  There will be more double exposures.

I just wrote a lot of b.s. that had to be deleted.  I was "holding forth," opining as if I were sage.  What can I say?  The temptation is always there.  It comes from writing too many graduate papers, perhaps, where you must assume the voice of authority, and perhaps of being a foreman for so long, too.  It is inevitable that from time to time you begin to believe it is true.  But my most charming quality, if I have one, is the ability to debunk myself.  Today, however, I do not debunk.  That part is simply defunct.

I slept last night, a full eight hours.  Advil PM.  That shit will fuck you up.  Dreams?  I only remember one.  It was semi-erotic, visual rather than tactile.  Perhaps I was reacting to the whole Cuomo disaster.  Oh, man, stepping down was not enough.  The long knives have been drawn.  By this morning, he surely doubts his decision.  He has preempted nothing.  Progressives are drooling and ready for the feast as are the commentators at Fox.  This is where the two disparate parties coincide.  If Cuomo did things like reach under women's blouses and cup their breasts, he has committed a crime.  He may have committed multiple crimes.  But the criminal trial system is apparently too slow.  Accusations are now convictions.  Why not?  Vigilante justice is justice.  That's why Trump is still president.  Many people accused states of destroying Trump votes.  We don't have time for the justice system.  He needs to be reinstated NOW!

I'm no Cuomo fan.  I just find the vitriol disturbing.  I've never even asked a woman (or anyone) on a date.  I have rarely initiated a kiss.  I can't imagine feeling entitled enough to cup a woman's breast uninvited.  So don't misunderstand me here.  Sure, I'm a camp follower for Trump, but. . . .

Well, this is no better than what I deleted.  I can hold forth in a serious tone or I can be satiric, but in the end, it amounts to the same thing.

In truth, I am semi-erotic visually.  I just feel the vigilantes are out and the knives are drawn for everyone. I watched Ari Melber last night on MSNBC.  He had Michelle Goldberg from the Times on to opine about Cuomo.  He looked like he was about to shit himself.  He does much of the time now.  He wants to adapt to the new environment, one he would like to believe he helped create, but as is often true, the new environment doesn't need him any longer and the Michelle Goldberg's of the world will turn on him as quickly as they've gutted others if they feel the need or get the chance.  Melber is guilty of something.  You can tell.  He knows his tine is limited.  Why should HE be the one to sit in the big chair and call the shots?

What astounds me is that they let that public masturbator Jeffery Toobin back on t.v.  How in the world did that happen?

You know The New Yorker won't let him back on staff, though.  They've got Ronan Farrow on their team.

Jesus.  I can't make a decent post any more.  I probably should go the way of Q.