A Beautiful Emptiness, The Horrible Nothingness 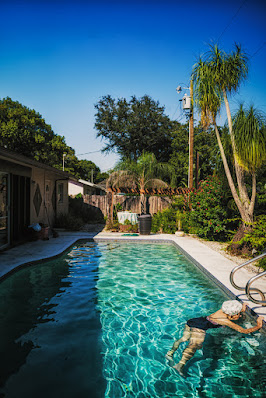 This is what Sunday mornings look like now.  I take my mother swimming in the neighbor's pool where she can gently exercise her broken shoulder.  I'm taking the week off from exercising, so I decided to bring my camera to amuse myself.  I shot this on my digital M10.  When I scrolled through the pictures on the card, there were more than I had imagined.  When I got home, I downloaded them.  Jesus.  The earliest ones were from 2020.  I've been living in a time warp.  My dream Leica M10.  I had to have it.  I barely use it.  Looking through the pictures on the computer, I was astonished.

But that didn't happen right away.  I was feeling weird at the pool, just tired, just out of it.  I was going to take a walk when I got home, but I felt exhausted and went back to bed.  That ate up much of my day.  When I got up, foggy, I decided to have a mimosa and headed to the Cafe Strange.  I wanted to write.  The strange zombie woman who has been behind the bar for the past few Sundays took my order.  Her face is a total mask, expressionless, zombie-like.  Bell's palsy?  Thorazine?  I don't know.  She is a young hipster, and this time the very corners of her mouth raised a millimeter or two.  There was a vague recognition in her eyes.  I'm sure I tip better than the kids who come and get a coffee and sit for hours.
That was the exciting part of my day.
The days have been spectacular, the air no longer muggy, the temperatures livable.  I sat outside and took out my notebook.  I took up my story where I left off.  It has grown.  As I write, I remember, but now, as always, I doubt the efficacy of the thing.  I know the writing is not as good as it was the first day, the prose not as precise.  I have the haunting feeling of failing that has kept me from finishing everything before.  Writing for an hour isn't hard.  Writing for many hours over many days or weeks is another thing.  You have to be fairly mad, I think, to sustain the effort and to live in that space with consistency.  A novelist must be an insane beast, a monster of a person, or so it appears to me.  When I see interviews with novelists who are happy and smiling, who talk about what they do and how they do it, I think, "This person writes cookbooks or guides.  This person is not a serious writer."
Usually, I am right.
But I wrote foolishly on until it was time to go to the grocery store and pick up the ingredients for that night's dinner.  Then it was off to cook.
I came home just before dark to a scotch, a cheroot, and two cats.  I had fed them before I went to mother's, but they were expecting another meal which I denied them.  The neighbor's cat hung for a bit, but seeing we were only communing, he headed back home.  My feral cat stayed a bit longer but eventually headed her own way, too.  I sat a bit longer enjoying the air, then returned to refill my glass.
That is when I downloaded the pictures from the Leica.  It was dark, the house empty.  I realized that I was back to that.  I didn't feel like cooking up pictures.  I settled into the couch and powered up the t.v.  Alone, I watched "Goliath."  When I went to bed, I was already halfway through the season, and I worried, "What next?"
I'll need to find more meaning in life soon.  I've become a t.v. watching caregiver who drinks mimosas and can't finish a story.
I'm getting out of town today, no matter.  I'm going to shoot up some film.  Perhaps I'll fuck up and make those wonderful mistakes again.  Those have by far been the most popular things I've done in a long, long time.
Posted by cafe selavy at 8:49 AM