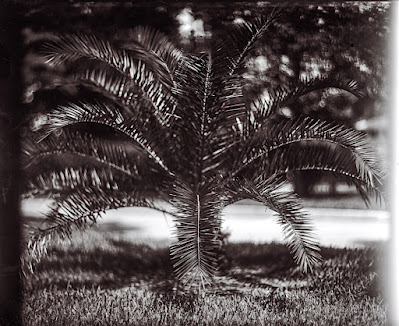 I did it, I did it!  Sorta.  I finally got one of the ambrotype dry plate photos to work.  Sorta.  The black edge on the left is due to the Liberator camera not covering a full 4x5 plate.  The white on the right side is due to the dark slide on the film holder not closing all the way.  So yea, I got another fucked up plate, but it worked!

I am one of the few people in the world trying to do this process.  There are probably so many good reasons for this I can't count them all.  Very few people have been successful.  If I can begin to get consistent results, I will do more.  Then I will begin to wonder why.  It is a slow, deliberate way to work.  Is it worth it?  Are the images more spectacular than other forms?

Yet to be determined.  This is a scan of the plate.  This is not how it looks when you hold it.  Backed with black, the image looks like this (lousy quality--I took it with my iPhone). 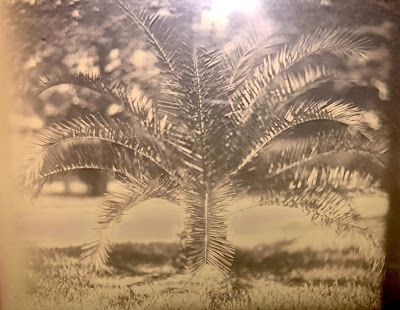 The glare at the top is caused by my desk lamp.  I just made this quickly.  But the resulting plate can be framed and mounted as a one of a kind photographic image.

So what do you do with that?

We'll see.  I still have to work at getting the process down pat.  There are a handful of wizards who love working in the dark arts still experimenting.  Fortunately, they share most of what they discover.  I say "most" because I fear I am not contributing enough to get the secret handshake.  I am sure there is information being passed that I am not privy to.  No real evidence, just my usual paranoia.

I'm an Outsider, don't you know.

Which became painfully evident to me once again yesterday when I sent around a bunch of silly texts to my friends about AOC and the entire Met Gala affair as well as some comments about the 'baller Russell Westbrook's wearing a skirt and knee boots at a fashion show.  A retired 'baller wrote an acerbic post about "n- - -a's" who where dresses.  I find such things hilarious.

I only have a couple friends who can tolerate if not enjoy my insouciance/glee at the profound silliness of the world.  But sometimes in my excitement I forget that.  I just want to give my pals a chuckle and lighten their days a bit.  My reward for this forgetfulness is often some cutting remark about my viewpoint or intelligence.  Undeserved, I feel, but I know some real ideologues who do not find any humor off message.

"You need some viewpoint diversity," one of them wrote.

"I ❤️ AOC...she can do whatever she wants lol," wrote another.  The [. . .] thing that's annoying about this today is that nobody knows what the hell the word performative actually means, apparently, at least not in a theoretical or critical sense."

Ouch!  I was only trying to have fun.  The Met Gala and the rest of it was like reading People magazine for me.  It was drivel that I was able to find some humor in.  You can analyze it, criticize it, perform Marxist/structural/post-structural/hermeneutical/feminist/identity theory analysis of it, sure.  You can trot out your academic chops, no doubt.  I don't care.  But pandering to referential authority in a text message. . . really?  Jesus, that's like trying to be learned on Twitter.  Texts and Twitter are made for wit, for the bon mot.

But some of my friends. . . well, they argue within the boundaries of textual authority.  That, fortunately or unfortunately, is not where life is lived, and when MAGA comes for them, they are going to run or lock their doors and call the proper authorities.  The strongly worded letter, however, is going to do them little good at that moment.  Their identity is going to be less than theoretical.  It will show itself in an emergency.

I love to read and I have a good education, but man, I admire a cowboy.

It is a wonder that I am so popular in my mother's neighborhood.  But then again, I don't text them in the mornings.

I must say, though, that I have been intellectually lazy since retiring and my friends' rebukes sent me reeling.  Last night, I began boning up on the postmodern post-structuralists once again.  I will do the same with social theories next week.  I don't wish to be caught in a gunfight with a knife.

I wrote back to one of my detractors that I just didn't like ideologues.

"Yea?" I responded.  "At least I'm not consistent.

To wit--Norm McDonald died.  Oh fuck me I loved watching Norm McDonald.  He was such a liar.  He loved his wife, he said, who was beautiful, and their daughter, but he was afraid he might be a homosexual.  His wife was not beautiful and they had a son.  Everything was a schtick.  He revealed himself through misdirection.  He went against the grain.  He disagreed with everyone.  Sometimes he even shocked me.  My world is reduced by one.

Don't watch this if you are easily offended even if you think you are not.  But this is Norm McDonald.