With Which You Are Comfortable 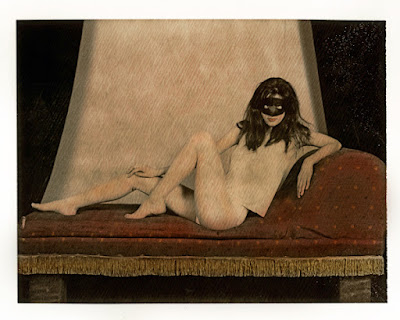 Oh why am I mucking about with big cameras and dry plates, spending dollar after dollar chasing some elusive look that I don't seem to be able to capture when I can make a simple Polaroid and color it on my own?  Look!  It is really something, I think.  Alas, I can no longer do this.  The film is gone.  Photographers and photography are pawns in the hands of tech companies.  I have been experimenting much, and as frustrating as it has been (mostly due to my errors), it has been fruitful in that I am finding which cameras I enjoy using most.  It comes down to user experience, doesn't it?  Yes, like everything else.  The best boat for you is the one you like to sail.  The best car is the one you like to drive.  The best camera is the one you like to use.  And sure, there are different boats and cars and cameras for different types of use.  No doubt.  In the end, though, you know which one and which use you like the best.

Probably.
If someone were to leave me money right now, I know I would get another studio.  I loved having a studio.  It was wicked fun.  But the money. . . I need to feel no guilt.  I need guiltless money.  I really want a studio again.
I am, however, a slave to guilt.  It is terrible.  I can be guilted into almost anything.  I will hide the fact that I am eating sweets this morning with my coffee.  "Oh. . . I eat a very healthy diet.  I usually have some yogurt or a hard boiled egg or often nothing in the morning, maybe a can of sardines and an apple for lunch.  Dinners are always healthy."  So, o.k., I'm eating a cherry danish this morning, but you know, I feel like tossing it up.  Yup.  That sort of shit.  I was doing so well, then I drank more than I should (about which I will lie) and then there was a cherry danish.  I feel terrible.
I feel terrible about the present.  I feel guilty about the past.
Living on the Trump/AOC border makes us all crazy.  It is the id vs. the super-ego minus any referee.  It feels like we live in a house where the parents never quit fighting.  It is an impossible situation.
I want to be good, mom, I swear. . . but oh, those guilty pleasures.
"Where'd you get that magazine!?!?!?"
"I found it in dad's closet."
"You need to stay out of his closet.  What were you doing just now before I came in?  Tell me the truth."
"Are those pictures of you?"
"That sonofabitch.  I'll kill him."
That replaces a long political diatribe I deleted, but it says pretty much the same thing.
Did you see the pictures from the Met Gala?  WTF?  But AOC was there.  She wore an Eat the Rich dress.  Actually it said "Tax" not "Eat."  But really, with whom was she consorting at the Met Gala?  I didn't get an invitation this year, did you?
But maybe I'm smelling too much "Animal Farm."
That is my take away among many others that I don't wish to reveal here and now.
Posted by cafe selavy at 8:27 AM