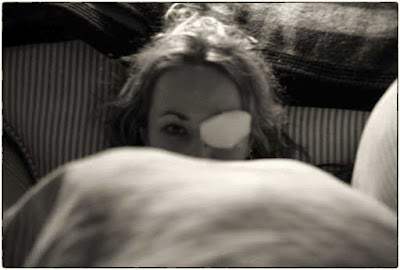 I opened up an old hard drive yesterday. Bad ju-ju. Q says, "Old hard drives are trouble, little digital crypts waiting for their spirits to escape." Tru dat. It was not the pictures that got me but the volume of writing that was on them--old journals (lots and lots and lots of them), stories, vignettes, letters, several beginnings of failed novels. . . . I used to write all the time. Constantly.

Here is part of the first thing I read.  It is perfect pre-9-11.  You can get the beginning and the ending, perhaps.  Maybe just a little more.

It begins with an email, then a song. The longing, the pulling of old love. You want to go back, to live there awhile. Maybe you drink the whiskey, consort with faeries and daemons. And then your wife or girlfriend calls your name and you are yanked back to the present, to the world of bad cars, ill health, and unpaid bills.

She wants me to write this narrative, the long-promised, oft started-narrative. It is her story, and she wants to hear it. Maybe it has been long enough now.

She was in my film course, a once a week evening class. I noticed her the first night. She was the most beautiful girl in the room and the one I knew I would teach to. However, I was married and tried hard not to look at her. But I kept her in my peripheral vision, always seeing her from the corner of my eye. Everything I did--every move, every word--was inspired by her. I knew a few of the boys in the class already, and they gave me the look. Yes, she was beautiful

Did we meet once or twice before the storm? I don’t remember now, and surely it matters little. Early in the term, a massive hurricane descended on Florida. I have tried hard in the past to make this an important part of the narrative, but it isn’t. It was simply an incredibly large hurricane that never came. The day it was to cross the state, it turned suddenly north and went inland at North Carolina causing billions of dollars of damage. That morning, I had taken my wife to the airport at dawn, then come home to put away the things in the yard that might become missiles. The last thing I moved was a ninety pound glass table top that slipped from my grasp in the misty rain and the dull gray light, the last thing I moved to the detached garage. It fell on my right big toe which was housed in a flip-flop, and crushed it in five places. I was lucky not to lose it. My wife did not come home to take care of me when she found out and, indeed, never really came home at all. When she got back into town, she told me that she was not happy. A few days later, she told me that she wanted a divorce. And that was that. I was unable to walk, owned a blind, diabetic German Shepard/Husky mix, and had just lost my wife.

The film class did not meet for two weeks. The first we missed because it was Memorial Day, the next because of the hurricane. When the class next met, I was unable to walk and the beautiful girl had a patch covering her left eye. Her name was N. I asked her what had happened. She had been in a car accident, she said, rear-ended on I-4. The air bag had gone off and damaged her eye severely. “Oh, dear, you will be rich. Will you marry me?” I said off-handedly. I was only slightly kidding. She screwed her mouth up a bit, her tongue slightly touching her upper lip as she thought. “Yes,” she said slowly, looking at me with her one good eye. The boys in the class went nuts. Looking back, I think I took her at her word.

And that is how it began for me. I did not talk to N for many weeks, at least not directly, but I was always speaking to her. And when the room went dark and we viewed a film, I would sit near her somehow, always nearer. One night, halfway through the term, N got up early and said she had to leave. “OK,” I said, and just as she reached the door, I told the class, “OK, lets talk about what will be on the test next week.” She paused, turned facing me, and waited. “I thought you had to go,” I said. She put her hand against the doorjamb and leaned seductively. “Oh, go on. I’ll wait.” She was a cinematic image. I swallowed the hook.

I had a student in another class who was friends with N. One day I mentioned to her that N was very pretty, that all the boys in my film class were crazy about her. She did not respond and I thought the effort wasted. But a week or so later, I saw N in the hallway and she said, “I hear you mentioned me to Andrea.”  “Maybe,” I said. “How old are you?” I asked. “Twenty,” she said. That was OK, I thought. I was forty-seven.

The next week after class, she came to my office. She wore a short, brown corduroy skirt and as she sat on my couch, she could not help occasionally showing her underpants. She could not drive because she was still wearing the patch and she always got a ride home with some boys. We talked for about an hour before I became worn out and said, “what about your ride?” “Oh, they will come get me.”

The next day, I got an email from her. By then, it was late in the term, close to Thanksgiving, and I was trying to make it to the end of the term without incident. I tried, but it was impossible. One night she called me at home and said she was in my neighborhood, nearby, and she could come over. “Oh, no!” I told her. She was my student. I could not have her over. Not yet. But she persisted and I was lonely and weak. I said OK.

That night we talked and hugged and kissed. There was a week left of class. I knew that it was wrong, but the end was close. I figured that was good enough.
Posted by cafe selavy at 9:00 AM