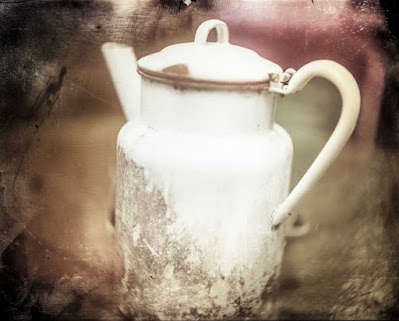 I know, I know, I know. . . but I just wanted to show you.  This is the first glass plate attempt using the new developer I had to mix by hand from half a dozen powdered chemicals.  The developer that I wasn't sure would work.  The dubious brass lens and the super-estimated exposure time.  I got an image.  It is terribly flawed, but I feel like I'm participating in the early stages of the development of photography.  Just getting an image is amazing.

But yea, it's the milk can again.  And yea, it is boring.  And yes, I did. . . I colorized it.  But if I am able to get the process down, I have real plans.  There are not so many people making dry plate pictures right now.  Why would anyone go to the trouble when a phone will give you a much cleaner, clearer photograph?

But that's the thing.

Last night, I watched the news with ma, and I heard the new Governor of New York say the very thing I've despairingly predicted.  She said the terrible storms were a result of climate change and were here to stay.  We just have to learn to live with it.  IT IS THE NEW NORMAL!

An article I read by a climate scientist this morning called it the Dystopian Moment.

But people would rather read about what Lil Naz has to say.  Is that how you spell it?

You wait.  The satellite watches me.  Soon everyone will be saying "The Texas Taliban."  Sure as shittin'.

Today marks the end of ten weeks of living with mother.  I take her to the doctor today.  She has many complaints that she will poorly relate about how well she is doing.  I am pretty sure he will take X-rays, tell her the bone has healed, tell her to stick with therapy for the next X number of weeks, and to call him if she doesn't begin to feel better.  He'll say it will take time but eventually the pain and swelling will lessen, etc.  She will come home with a complexity of feelings about it.

I am wondering about my extraction.  I have to go home sometime.  I don't know that she feels that way though.  She can't imagine that my life is any different at my own home than it is here.  You sit and talk, make dinner, watch the news, eat, then settle down for an evening of "Frazier" and "Gunsmoke."  It's the same everywhere.  What else would one do?

Her friends tell her she's lucky to have such a caring son.

That is a form of self-defense on my part.  I am getting to be snippy.  Most nights now, I feel entombed.

But I am certain that when I go home and am alone, I will be miserable, too, and will feel a terrible guilt as frosting on the cake.

There is no winning in this life.

I'm getting a t-shirt made that says "Team Bourdain" atop a noose.

But my travel/art buddy is much different.  He is getting ready to leave in a couple weeks to walk the Camino de Santiago on his religious pilgrimage (link).  He will be gone for many weeks.  And he has two other European trips planned following that.  He tells me I need to hit the road.  Sure, I say.  Just as soon as. . . . I tell him he should start a travel blog.  He has been a traveller for many, many years, and who doesn't like a travel story?

But not everyone likes the idea of shaming themselves in public daily the way I do.

It is Friday.  The Labor Day weekend is upon us.  That means within a week or ten days, we will have our first hurricane warnings in my own hometown.  It happens every year.  Most years we get lucky, but sometimes we get hit.  All we can do is cross our fingers and lay in supplies.

Ma and I are too cheap to get a generator.