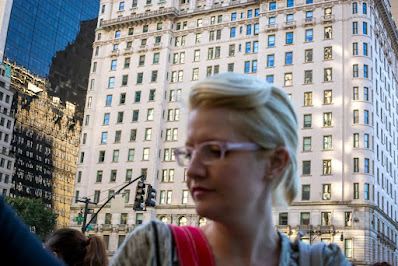 As I have said, not all the photos I took in NYC were great, but I kinda sorta liked some of the ones with blurry heads.  You know what somebody said--focus is a bourgeois concept.  I have worked on many pictures such as this one, and I will be posting them here from time to time.  Because I can, I guess.  I mean, I am the proprietor of this establishment.

But I made a mistake.  No. . . I've made many.  But I made one recently that gave me a start.  It had me thinking, "What sort of tool have I become?"  As I've confessed here, I keep a FauxBook page so that I can communicate with some photographers, and I have also gotten onto some of the photo forums.  That is where I learned to make the dry glass plate ambrotypes.  There are some enviable photos from time to time, and I like to see them.  They inspire me.

That should have been good enough.  Rather--and this is a hard confession to make--I posted some of my own photos on them.  Oh, as I have reported, what fun it is when you are popular, when a photo begins to rack up the "likes."  Of course, then you feel the need to participate in the site because you feel you must give "likes" back.  I am not good at that.  I am not good at any of it.  I am blaming my Covid loneliness for it all.  But there I was, doing a thing I have publicly despised for so long. 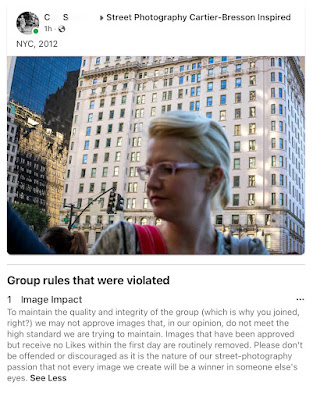 I was floored.  My photo was deleted because I violated a Group Rule.  Which one?

Jesus. . . I felt like a teenage girl.  I felt bullied.  I wanted to climb into the bathtub and slit my wrists. I'd been fooling myself too long, and now I was exposed.  My photography is shit.  I should take my blog down.  Too much evidence of my hubris and lack of photographic acumen.

But. . . wait a minute. . . look at some of these other photographs on the site.  What?  Are they shitting me? THESE are of high quality?  THESE meet their "high standards"?!?!?  O.K., fuckers--put up your dukes.  Let's get ready to rumble!

Yep.  I thought all that.  Not really.  I am always on Team Bourdain, but not over this.  But the power of social media became very evident to me that day, the Twin Peaks of Embarrassment and Rage.

I still like the photo.  Whatever.  Differences of opinion--that's what makes a horse race, or so they say.

But Jesus.  It's not like I sent a story to the New Yorker and got back a rejection slip.  I mean. . . this is a fucking FaceBook page!  It IS embarrassing.

I had the better idea when I was on Team Vivian Maier.  Let them find me when I'm dead.  In the meantime, I'll just keep making pictures.

I shouldn't have brought it up.  I know how people are.  Some will be secretly (or not so secretly) thrilled by this.  "He needed to be taken down a couple pegs," they will think.  "The boy has gotten too haughty."  That's the way people are, I know.  Yea. . . I'm like that often enough, too, of course.  I have often thrilled at someone's defeat much more than I have at someone's victory.  I can be a real prick, too.

But things like that just don't seem to matter as much any more.  What people think or how they act are rarely of any importance to me now.  I feel a negligible need for vengeance.  Only here and there.

I didn't leave the house yesterday until it was time to have dinner with mother.  And I didn't want to then.  Is this a bad sign?  I think it is a bad sign.  I should want to be "out there," right?  I just don't feel it right now.  But please. . . don't call the hotline.  I'll be fine.

Of course, I should probably end these confessions, too (though today's is pretty funny).  I need to get out and find some stories.  This navel gazing is not its own reward.