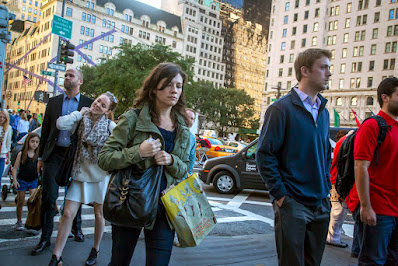 I have a million street photos like this one.  Thousands, maybe. . . hundreds.  I just discovered (like I'm exploring for gems) a folder I haven't looked at since 2012.  For me, it is overwhelming.  Probably for some of my friends, too, because I keep barraging them with pictures.  They are not sensational pictures, but I love them.  I wasn't looking for anything quirky or spectacular.  I'm simply fascinated by the juxtaposition of people in the same place, on the same street, locked in separate but shared experiences.  We don't see life this way.  It only happens in pictures.

I lament having not spent more time in big cities.  Had I lived in New York, I think, I would have had so much, so many, so great. . . . But who knows.  It is hard making photos in the street.  It is not relaxed.  You are running on adrenaline.  You move through the street looking, trying not to be conspicuous, trying to avoid some inevitable confrontation.  By the end of it, you are spent.  The light beginning to fail, you look for a good cafe.

Now I sit, music playing, working on old images again and again and again until my nerves are frayed with the repetition of editing keystrokes, my hand cramping from moving the mouse.  When I am finished post-processing them all, I might put them together in a collection.  I will call it, "The Indecisive Moment."

I am becoming lazy in isolation.  I is not a laziness, really.  It is something else, a contemplative paralysis, that keeps me from moving, from doing.  The world becomes an obstacle, a hurdle to be negotiated.  My tolerance for minor obstacles is wearing out.  Everything seems a disaster.  It's why I need a studio.  A studio is a place of production.  There is "doing" there.  There are accomplishments.  And, often enough, there are people, too.  And after a day or a night of working in the studio, at least in my last, there is a short walk to a cafe for a meal and/or a drink.

The house is just paralysis.

"Oh," you say, "quit fucking whining and just get a studio."  It's not that easy.  Try to find one.  You won't find a "Studios for Rent" page in the local newspaper.  And they are expensive.  I had the sweetest of deals at my last one.  It was owned my a big non-profit organization that owned the largest Tiffany glass collection in the world.  They were very generous.  And as I say, I was within walking distance of just about everywhere in town.  But they sold it to a greedhead and I met Ili and it just seemed time to close up shop.

I would like to open that shop up right now.

But there is travel, if I can manage it.  It will not be like before.  I used to feel confident.  I liked going out because, at least I felt that, I had panache.  I could be a charmer.  I know.  It is hard to believe.  It is so hard to believe, in fact, that I no longer can.  That has been fairly beaten out of me.  Friends and ex-lovers can do that for you.  There is no amount of help in that department that is too great.  Your friends, of course, will tell you you are full of shit, and ex-lovers will always run you down.  But I swear I used to have enough confidence to face the world.  Now. . . I am not so sure.  I don't seem to be able to prepare a face to meet the faces that I meet.  I am like a daytime vampire.  Those facial mirrors reflect nothing.

Yea, that's right.  I'll whine if I want to.  But I'll get some hats.  Surely they will make all the difference.

I made a brand new dish last night.  I mean, I had never made it before.  Being Saturday, I wanted something good for dinner, something one might get on a big date night out.  Garlic buttered shrimp pasta popped into my head.  It sounded fun.  I Googled it, looked at a few recipes, and went marketing.  Of course, I got a good bottle of wine and headed over to my mother's.

It wasn't difficult, though there was a good amount of prep, but having not made it before, I was unsure about seasonings.  The garlic went into the heated butter with some Prosciutto (my addition to the recipes), salt, pepper, and crushed red pepper.  Then the shrimp, at the end of which I put in a good amount of arugula and grated Parmesan.  Lastly, I put the cooked linguine in the pan and stirred.

"Do you know what this would have cost in a good restaurant," I asked my mother?

"A lot," she said, not really knowing as she never goes to good restaurants.

"Well," I said, thinking through what I had spent, "probably less than I spent making it.  Maybe not.  But the shrimp and the wine alone were fifty bucks."

Still, we had enough left over for another meal.  And really, it was good.

Home in the dark and a whiskey on the deck before I went in to tackle some more old photo files.  More music.  More emotion.  It probably is not a good thing to do before bed.  It does not wind you down, that's for sure.

I may take a camera out today.  It feels foolish, but I may.  I can photograph another building or another sign or some dumpsters or some spilled paint if I come across it.

And, of course, there will be mother's.