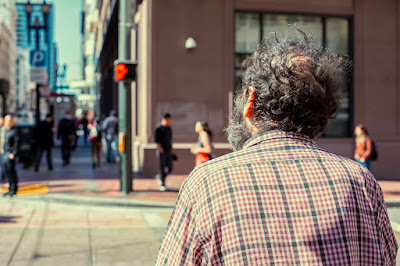 While I am Covid negative, I think I am not Covid free.  I was ready to re-enter the world yesterday.  I did another round of light exercise and took another walk.  I showered and readied myself for the final visit of Mr. Tree to settle up the bill.  The day was a pretty one, bright light, gentle temps.  I had even trimmed my fingernails which had been ignored and were beginning to tap against the computer keys.  I'd gone to the bank and cashed some checks, so I had a thick wad of fifties and hundreds riding on my hip.  I tell you, I was ready for life.

Mr. Tree showed up.  As expected but not quite anticipated, his price was a knockout punch to the heart.  I could feel myself sicken.  I haggled a bit.  The wad I had counted on was not enough.  I ended up writing him a check.  When he was gone, my knees felt weak.  I hadn't eaten.  Surely that was it.  I vowed that I would not use Mr. Tree next year as I alternated between weakness and rage.

But now that was over and done, and there was nothing left to do.  I would put that behind me and tell myself "lesson learned."  Again.  It seems I learn these lessons over and over.  But the yard looked nice.  I had a compliment from a neighbor just that morning.  It was not like I got nothing for my money.  So that was it.  Forget about it and move on.

For the first time in weeks, I went grocery shopping.  It felt strange to be around people again.  I felt a bit gun-shy.  I should have super-immunities now, or so I've read, but I imagined I could feel the germs swirling about the miasma surrounding me.  People are dirty, germie creatures.  They just are.

I grabbed the "fixin's" for the evening's dinner--salad, chicken, Brussel's sprouts, and potatoes.  I picked up some milk and a bottle of wine.

At the checkout, I felt robbed again.  WTF?  There was a hole in my pocket.  I could feel the trouble with the world.  It is the feeling that you lack control, that everything is beyond you.  The price of things rise without your say.  Suddenly, it is not your system, not your world.  Everything is wrong.

You feel insecure.  And that is it, I think, the trouble with things.  People want security.  They want to feel invested.  They want to feel they belong.  Give people security and they buy into the system.  It is their system.  They will defend it because they are invested.  But many people do not feel secure right now, left or right, cis, trans, Black, White--all that is left to people is activism.

How can you feel secure when you know you're going to end up once again with Trump?

The universe is against us.

Back home, mid-afternoon, I tried to read, but my head was heavy, my limbs full of sand.  I lay down for a nap, but I don't think I slept.  Though my eyes were closed, I was fitful.  The day seemed long, and I felt short, and in a short while, I was up again.  It was still too early for dinner, so I sat down at the computer and worked through more of my interminable files.

But I was jumpy.  The pictures brought me no pleasure.  I got up, grabbed a handful of nuts, and poured a drink.  I sat outside on the deck and watched the day pass by until it was time to go to mother's.

It was traffic time.  The trip over set my nerves on edge.  I was getting achey.  I didn't want dinner.  I wanted to take a pill that would put me out for the rest of the night.  But when I pulled into the driveway, my mother was there, waiting.

The old routine.  We sat and chatted about nothing, about relatives and the troubles with the world, and then it was time to fix dinner.

Chopping and cooking, I began to feel a collapse coming on.  As the sprouts steamed and the potatoes boiled, I sat down.  My mother put her hand on my back and said I felt warm.  I could feel a fever and a cold sweat on my forehead.

By the time we had eaten, I felt that Covid had returned.  All I wanted was to get home and pop some Tylenol, to sit on the couch in front of the television until it was time to go to an early bed.  I could see the concern and disappointment in my mother's eyes.  I just wasn't up to the task.

At home, I poured a big whiskey so that I wouldn't have to get up.  I turned on the television.  I needed something easy to watch.  I scrolled through HBO series.  "100 Foot Wave."  What?  It was a series about big wave surfing.  Oh, yes, that was just the thing.  Perfect.  I sat for three episodes during which I imagined myself surfing again.  I could do it, I thought.  It was just a matter of determination.  You can't give in, I told myself.  You can't lie down.  I imagined myself with the pretty wife of the subject of the series, a chill hippie girl who made me eat hippie food and do yoga and meditate, someone who would feed my body and my soul.  Yes, it was all possible.  I just couldn't quit.

Before ten, I was ready for bed.  My mother had given me some Benadryl because I had begun to sneeze and cough.  The cough had become worse and worried me.  I popped a Benadryl and some Tylenol besides.  The bedroom was quiet but for the hum of the air purifiers.  If I'd had the energy, I'd have put on some music for the night once again.  I felt the day, somehow, had turned against me.  I wasn't well yet, not by a long shot.  My body ached.  I lay down and waited for the drugs to take effect.